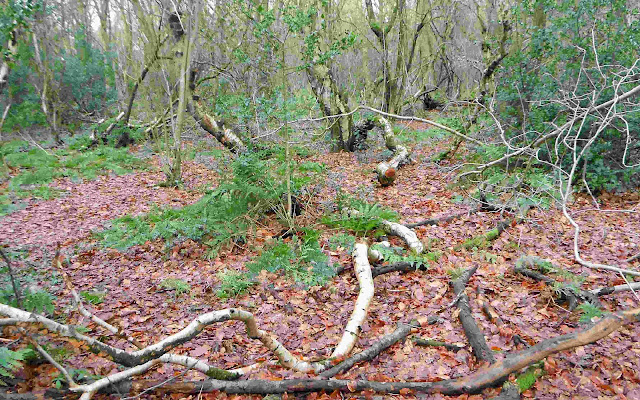 Lockdown again, so back to what we did in the last one - go for walks. 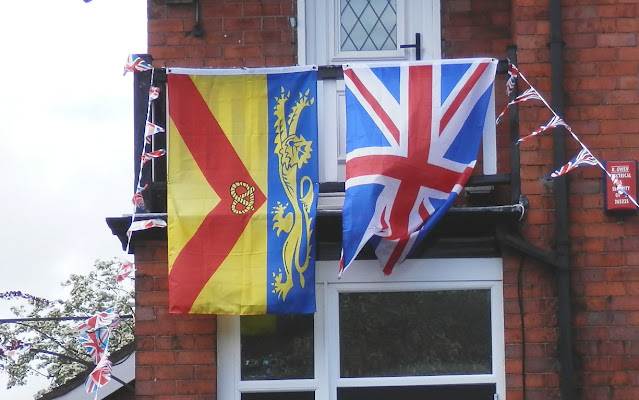 Brexit Day - the UK leaves the European Union today.
We'll all be watching to see what the effects, on England+Scotland+Ireland+Wales, Britain, Europe, and the world, will be.
One thing that is predicted is that people will think harder about where their roots really are - and what their allegiances really are.
This household clearly identifies not just with the United Kingdom (flag on the right) but with Staffordshire (flag on the left) too. Some EU flags are still around - an act of sorrow at leaving perhaps, or do those people feel European at heart? -, but a lot of flags of the St George Cross (England) too.
Curiously, a few 'world flags' (ie the United Nations flag) are also appearing on houses, which I have never seen before.
Posted by Mark R at Friday, January 01, 2021 No comments: 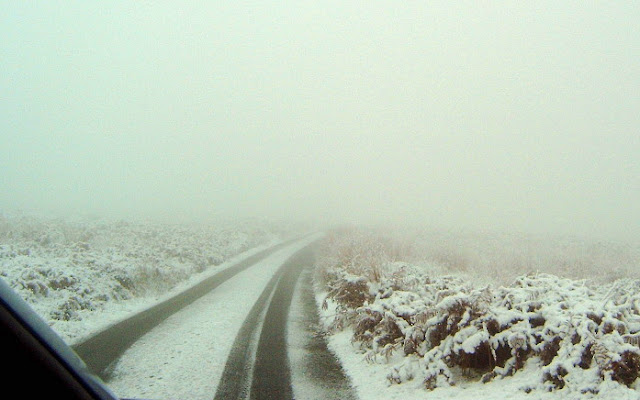 No one really expected snow as the weather had been mild really for December - but then snow comes at unexpected moments.
There was enough snow to make it, in some parts of the country, an official White Christmas, but Staffordshire's substantial falls were a couple of days later. This is the scene on the hills & moors to the north of Leek, where it always comes thickest. 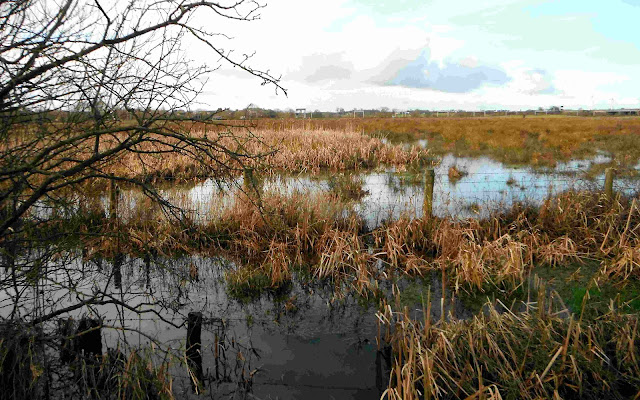 Rain, rain, rain. Although the skies have been variable - sometimes blue, sometimes grey - and the temperature relatively mild for winter, it has been WET.

These are the Doxey Marshes, near Stafford.

Pub gone to the dogs 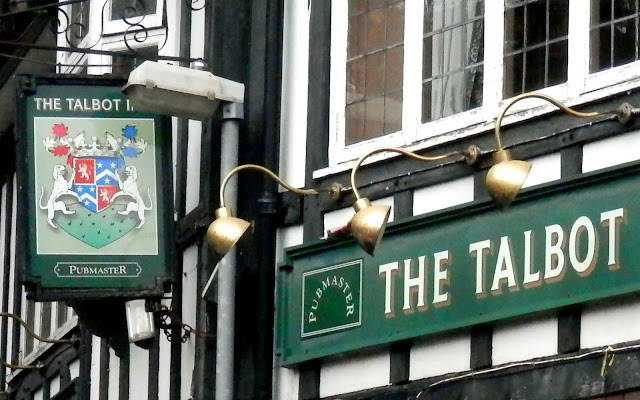 The Talbot in Cheadle has now closed, possibly forever.  It's a shame; it was just an old boozer, but a great old boozer.

'Talbot' was the family name of the Earls of Shrewsbury, who owned lots of land in and around Cheadle, even into the last century.
The dogs that you can see in the shield of arms are of course hunting Talbots, and it could be that this breed of dog is so-named because the family adopted them for their arms some 600 years ago.

A victim of centralisation 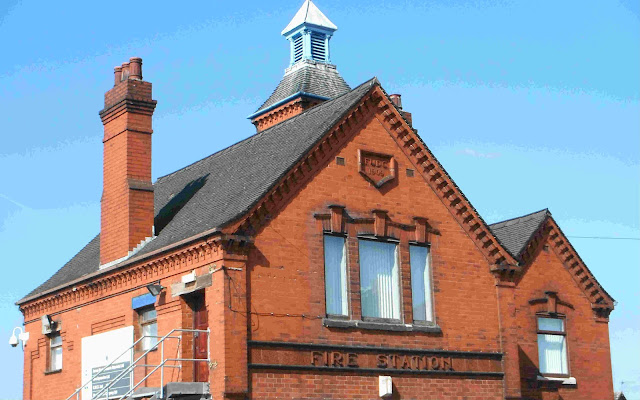 This rather stylish building is the Old Fire Station, built in Fenton (part of Stoke on Trent) in the first decade of the twentieth century. It's now in the possession of a ceramics company.

The initials on it - FUDC - foxed me for a while, but they must stand for Fenton Urban District Council, which was abolished in 1910 when it was merged into the much larger city government. The fire station had the same fate - within ten years the city's fire services were 'centralised' and this building sold.

It's a shame that such smaller councils were stood down; I honestly think that neighbourhoods miss that sense of local control.
Posted by Mark R at Monday, November 30, 2020 No comments: 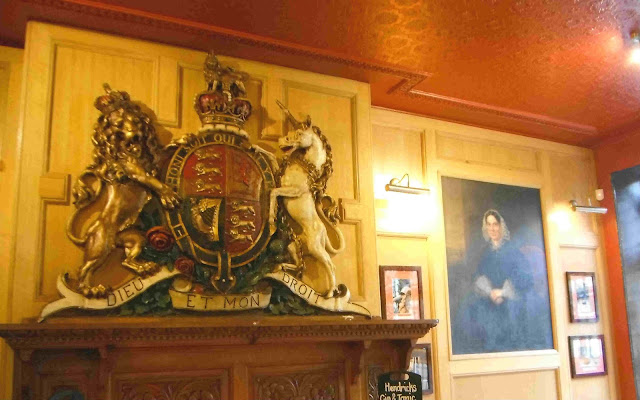 The word most often applied to the Glebe Pub in Stoke town is 'stately' - and it is. This old Victorian was restored by the Joules beer company, and really is an asset to this already heritage-rich corner of the town.
The only shame is that we can't go there right now.  We are in the middle of a second Covid lockdown across all England.  Roll on the time when pubs can reopen!
The royal arms over the fireplace are the gasp-out-loud feature as one enters the pub.
Posted by Mark R at Friday, November 20, 2020 1 comment:

Death has undone so many 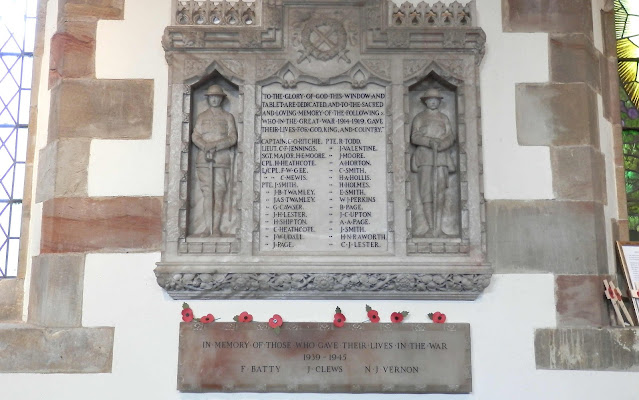 Yet again, Armistice Day is upon us - the day to remember the servicemen and women killed in the world wars.
It's always sobering, and quite shocking, to walk into churches in villages deep in the countryside and see the record of how many of their young people were killed in WW1 - often a huge percentage of the village's population at the time. This memorial at Yoxall is no exception.
As TS Eliot's poem says: "I had not thought death had undone so many".
Posted by Mark R at Wednesday, November 11, 2020 1 comment:

Wild panther on the loose 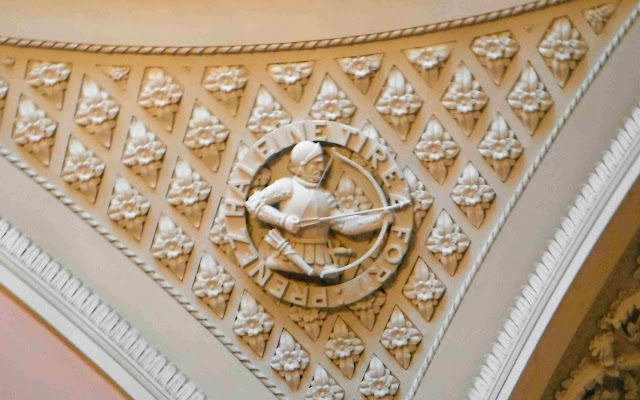 The most famous story of the Giffard family of Chillington Hall seems a little underwhelming compared to some of the affairs that the Giffards have gotten up to. It is that: one of them shot a wild animal. Hmm.
Nevertheless, the story (legend?) is so important that it informs the family coat of arms.

There are a number of variations on the 500-year-old story, but basically it seems that Sir John Giffard had a menagerie from which a panther escaped.  From some distance away, Sir John saw the animal as it was about to savage a mother & child. Sir John shot it with an arrow; and prevented a tragedy.

As you can imagine, the story has been knocked about a bit.  Reputable sources say both panther and leopard, crossbow and bow & arrow, that Sir John was in pursuit or in the hall, and that the distance of the shot was up to … one mile!

But, good stories should never be over-examined.

Thus, at Chillington Hall, you will see many references to this feat – including this detail on some rather lovely plasterwork. 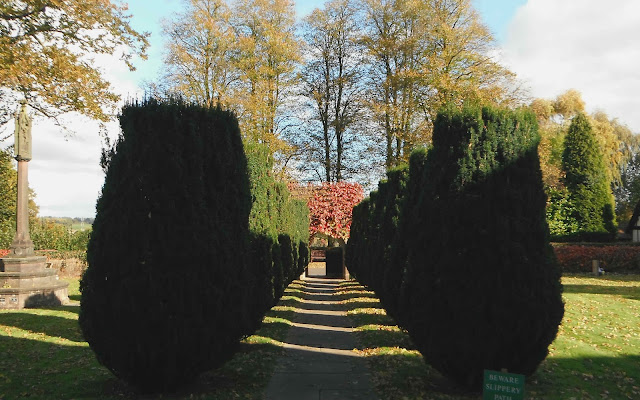 It's one of those autumns again, ie similar to the ones of the last few years: sunny days followed by foggy, turn by turn.
But the most interesting feature of these recurrent autumns is that the colours are so vivid: the russets very red, the greens so verdant.
Posted by Mark R at Sunday, October 25, 2020 No comments: