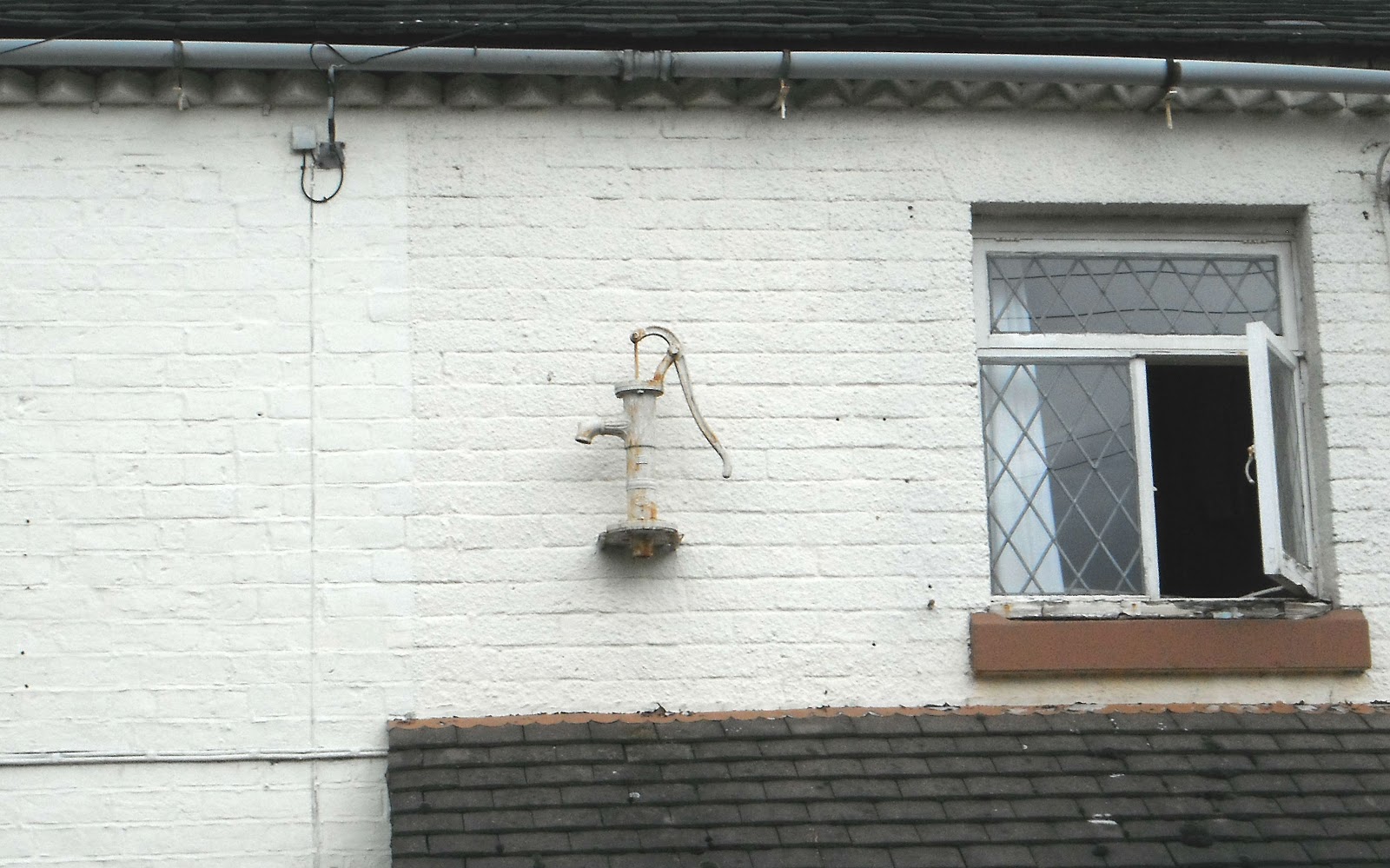 In Oulton village, the person restoring this cottage came up with an interesting solution to the problem of what to do with an old but historic item lying around the property.      As the cottage is known locally anyway as White Pump Cottage, s/he just stuck the old pump up on the front wall of the cottage.
A very neat solution I think.
Posted by Mark R at Monday, September 29, 2014 1 comment:

Simply a megalith for virgins 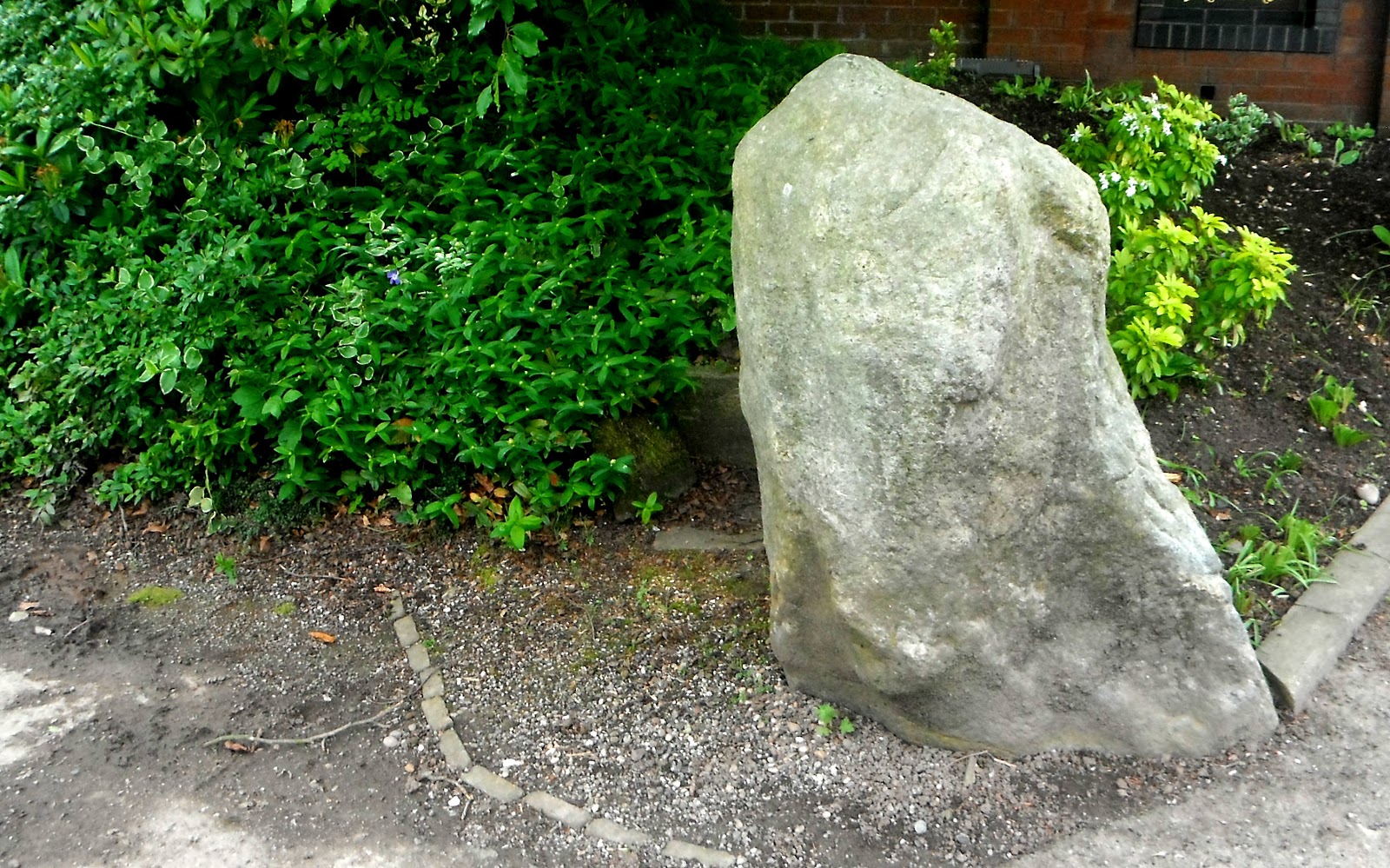 A simple stone, all on its own, decorating the entrance to a household drive...?  So it appears.
But the truth is never as simple as it looks. Around this ordinary-looking boulder weaves a web of legend.

This mysterious 'Webb Stone' in Bradley has many legends associated with it, mostly to do with virgins and livestock (aren't they all??).  It is even said to spin round occasionally - giving it its other title of The Wanderer -, though no one has lived to report a sighting of such.
Its 'proper' history indicates that it may (or may not) have come from a local, ancient stone-circle, now dispersed, or perhaps was a Saxon boundary stone. There are certainly other similar stones (all glacial boulders) to be seen elsewhere in this village.

Rather incongruously, it sits forlornly by the side of the road, unlabelled. Though... unmoved.
Posted by Mark R at Saturday, September 27, 2014 6 comments: 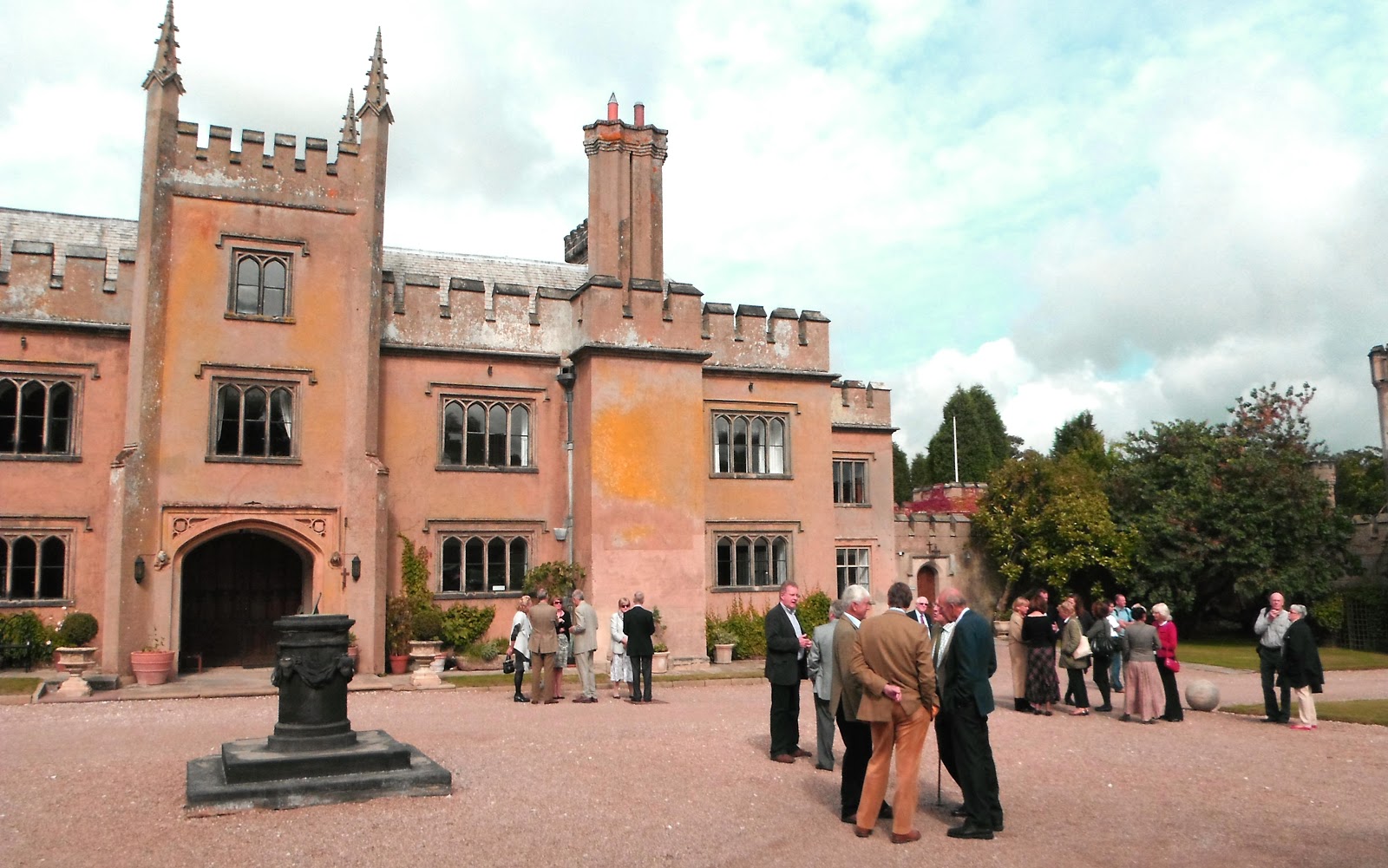 Blithfield Hall is often described as one of the "oldest castles in England" though it's clearly been restored and built upon many times.  The turreted towers do contribute to the castle description.

It is one of the stops on the Abbots Bromley Horn Dance, when the dancers travel from site to site during the course of one day.
Posted by Mark R at Thursday, September 25, 2014 3 comments:

Dunghill of the past 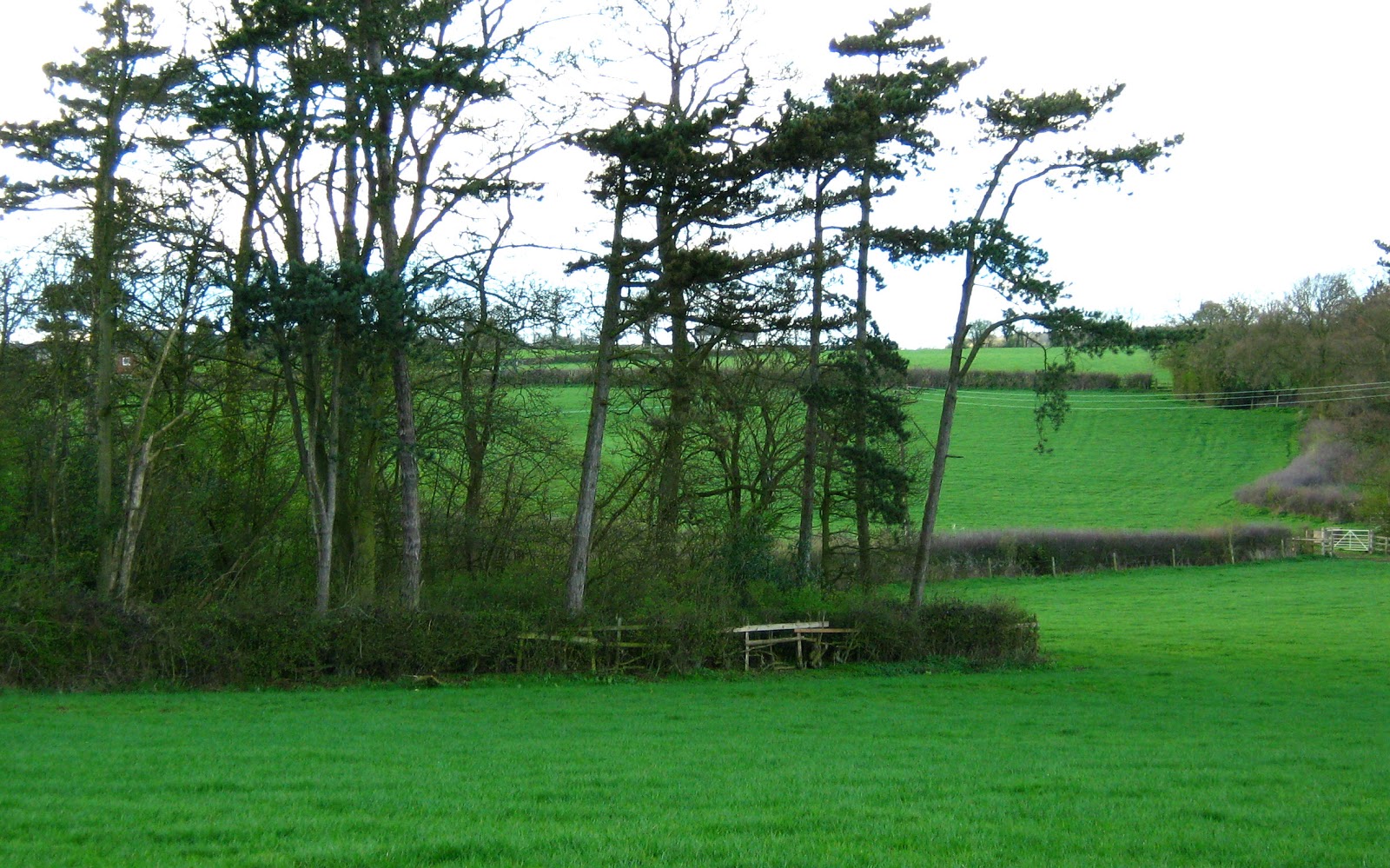 The land we live on has been inhabited for centuries -- yes, not a very profound statement, but we human beings live in the present, and "the past is a different country" as someone said, so it's sometimes an odd shock to think that the land was not always as we see it, even if we should know that already.

This seemingly pristine copse near Newborough is actually known on the map as 'Dunghill Plantation'. Clearly it must have had a past totally different to its present...
Posted by Mark R at Tuesday, September 23, 2014 2 comments: 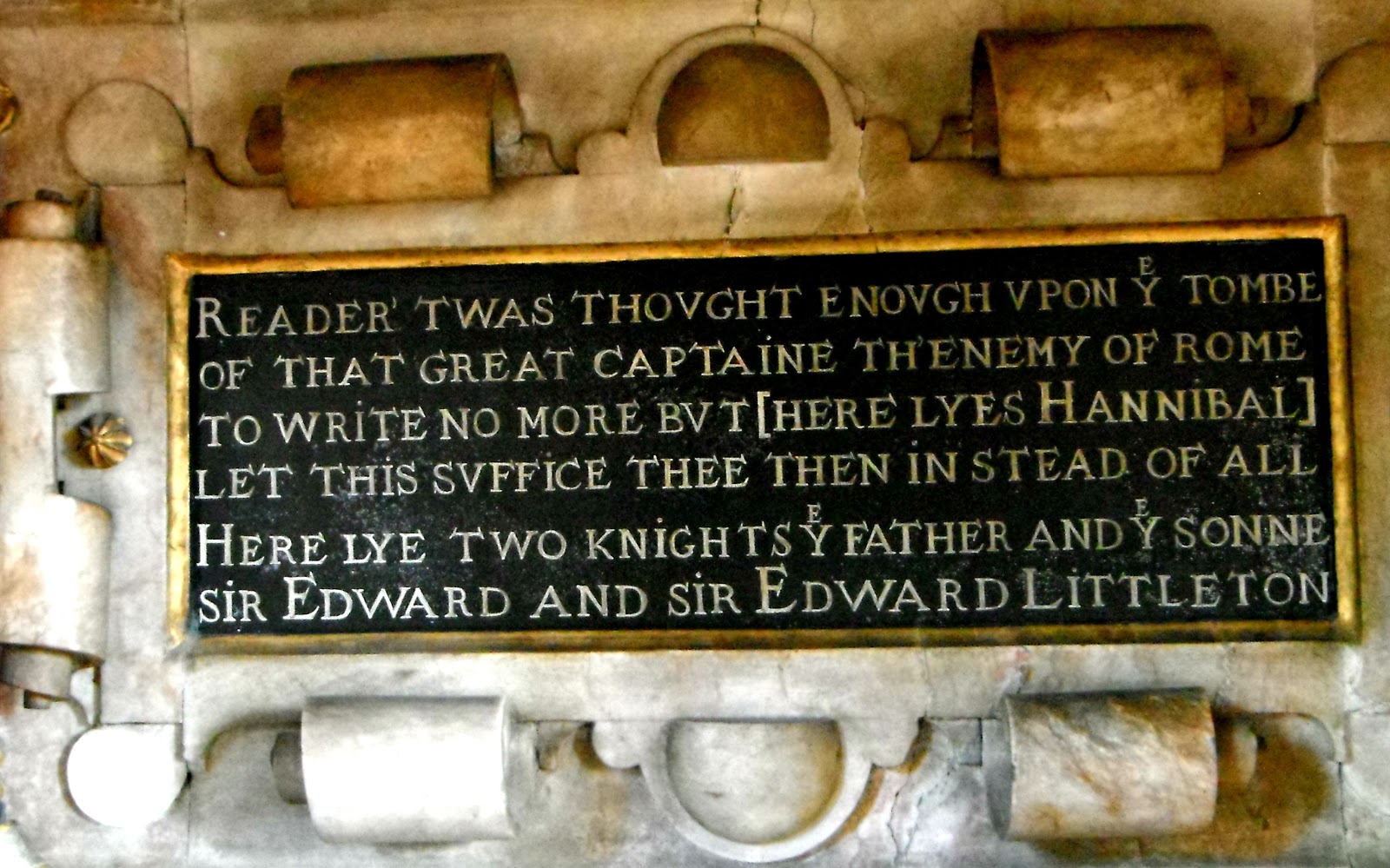 I'm not sure whether the writer of the epitaph on this tomb at Penkridge Church is being rather learnedly-clever or writing with tongue-in-cheek.
Maybe the point is that each of the relatives could interpret it as they wanted...?    Or maybe I'm reading too much into a few simple lines?

Here's the modern version:
Reader!  It was thought enough, upon the tomb of that great captain, the enemy of Rome, to write  no more but 'Here Lies Hannibal'.
Let this [the two lines, below] suffice thee then, instead of all [that might be written]:   Here Lie Two Knights, Father & Son / Sir Edward and Sir Edward Littleton.

Now, is the writer being sarcastic with his comparison of regional land-owners to a major figure of history like Hannibal?  Or respectful?  Or, very subtly, both?!
Posted by Mark R at Sunday, September 21, 2014 2 comments: 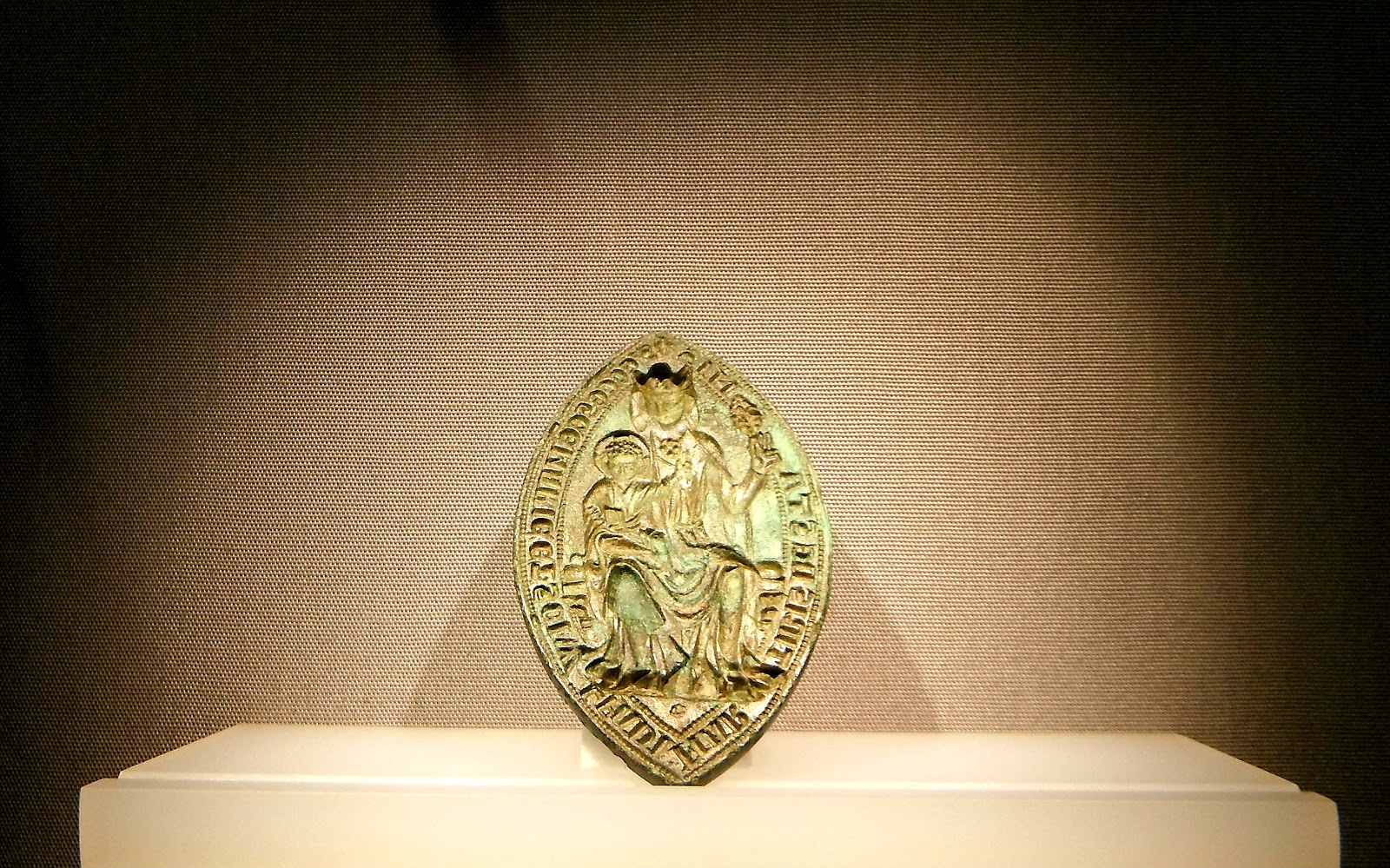 The medieval seal of the ancient priory in Stone turned up a few years ago - buried in a field in Surrey.  A metal detectorist had found it.
So the local people of the town raised thousands of pounds to buy it, even though the priory is long gone.
You can see the seal on permanent display in the parish church. 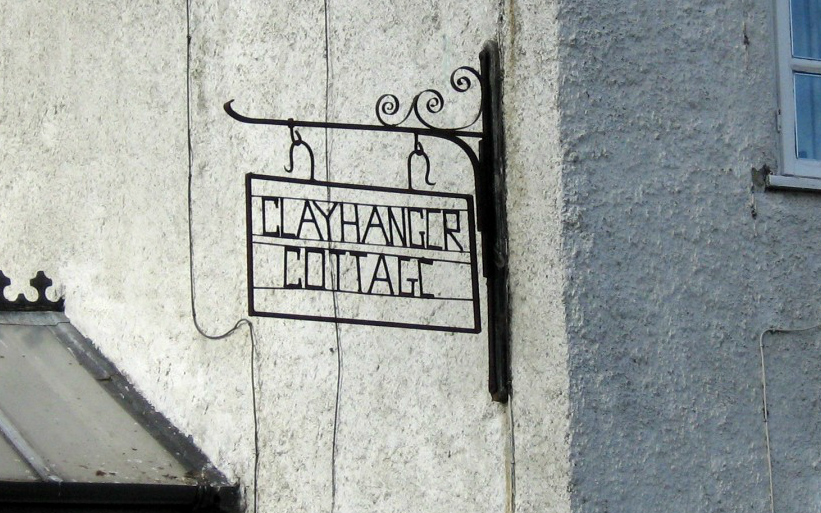 Anyone from Staffordshire will immediately react to the word Clayhanger - it being the name of the first of Arnold Bennett's trilogy of novels of family life in the Potteries.
Why this cottage (just outside Cheadle) adopted the name, I don't know.  Maybe the owner is a Bennett fan.

They're great books of course.  Read the workhouse section by clicking here.
Posted by Mark R at Wednesday, September 17, 2014 1 comment: 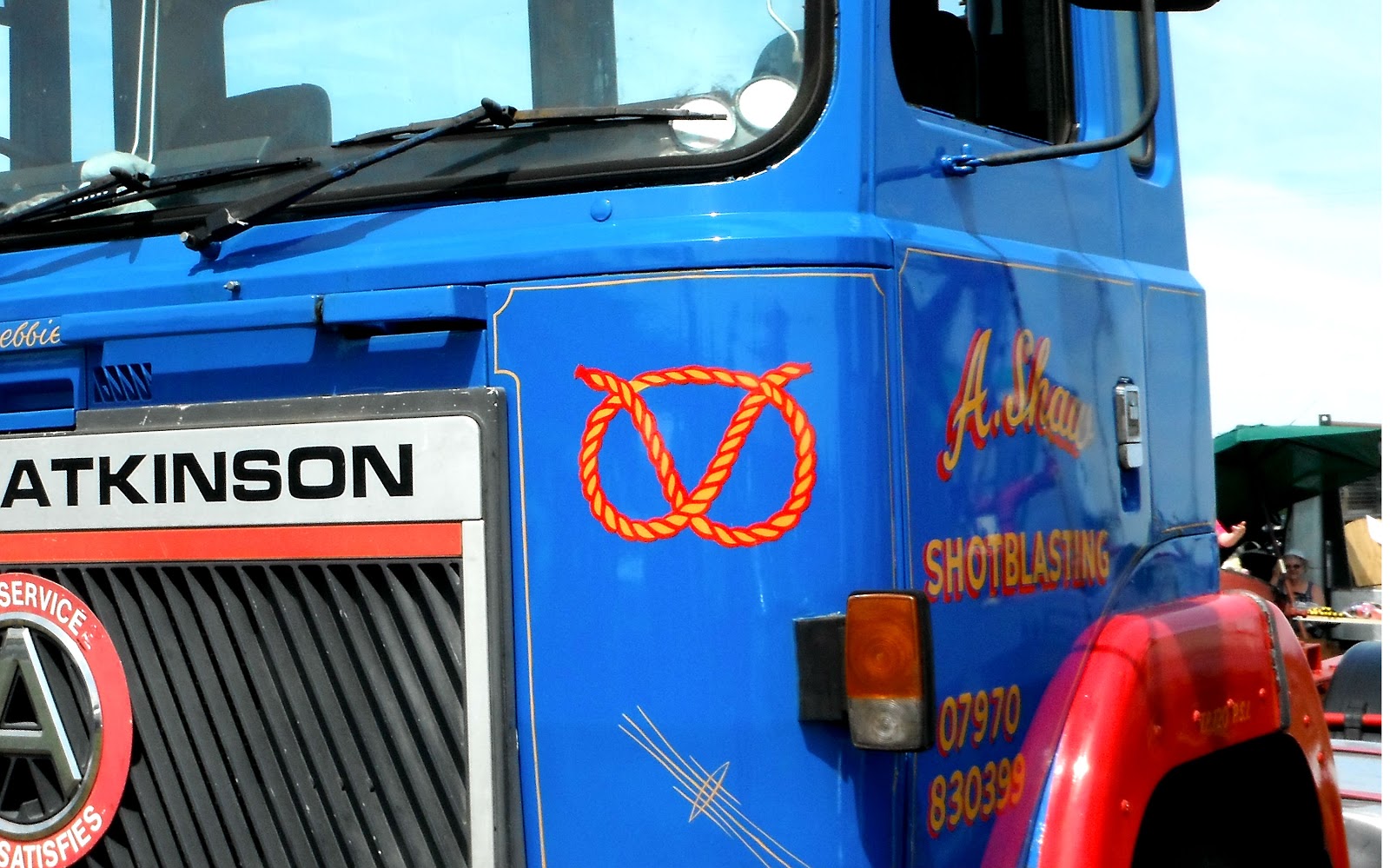 As people may know, I collect sightings of the ‘Stafford Knot’- it being the symbol of Staffordshire.
This is a nice example, from a shotblasting-company whose owner clearly is proud of his/her Staffordshire roots.
Posted by Mark R at Monday, September 15, 2014 1 comment: 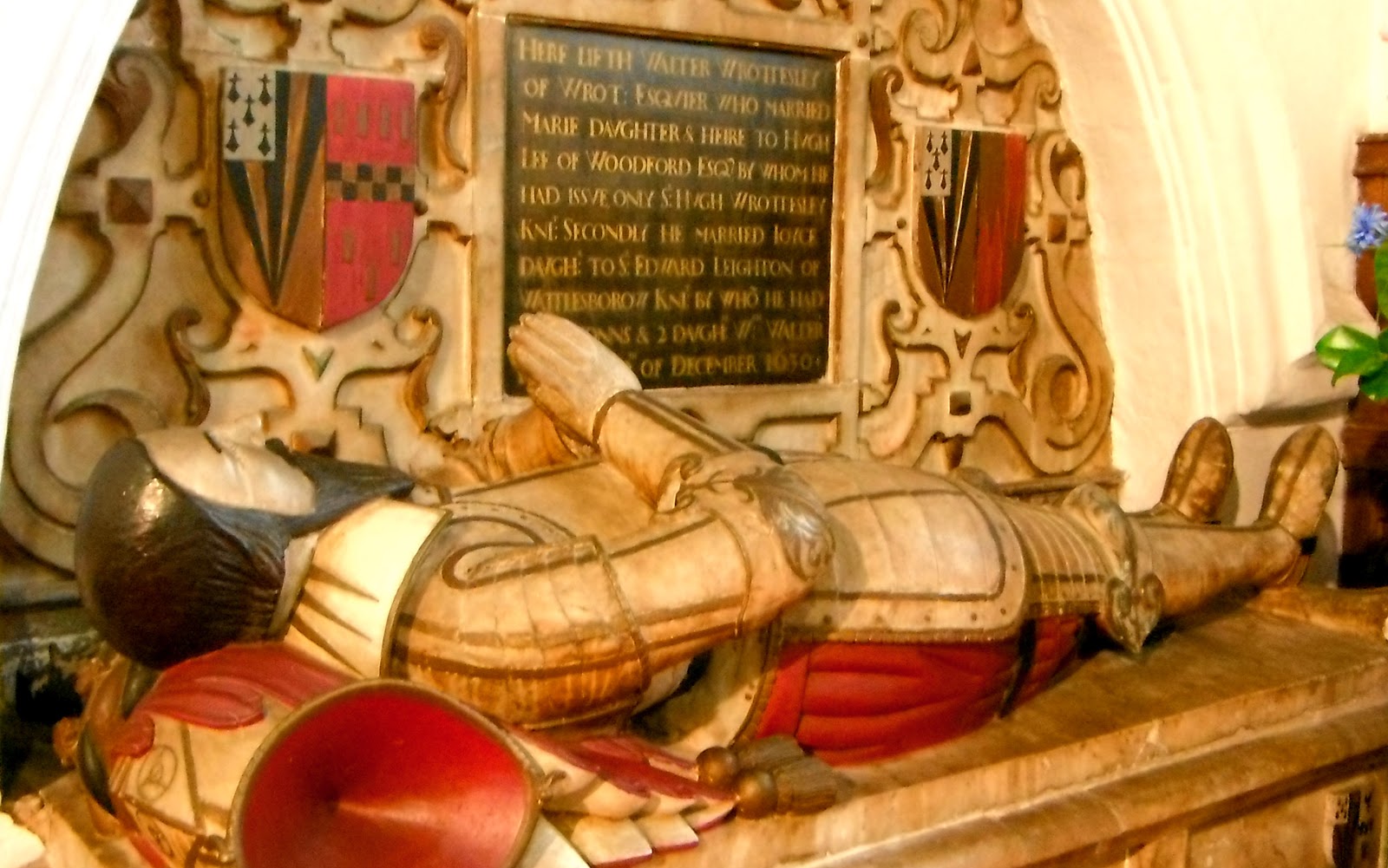 This astonishing monument at St Nicholas Church in Codsall dates back to the seventeenth century when nearly all such grand tombs were decorated in such bright colours.  The fashion for unpainted stone came later.
Sir Walter Wrottesley is the grand lord's name.
Posted by Mark R at Saturday, September 13, 2014 1 comment: 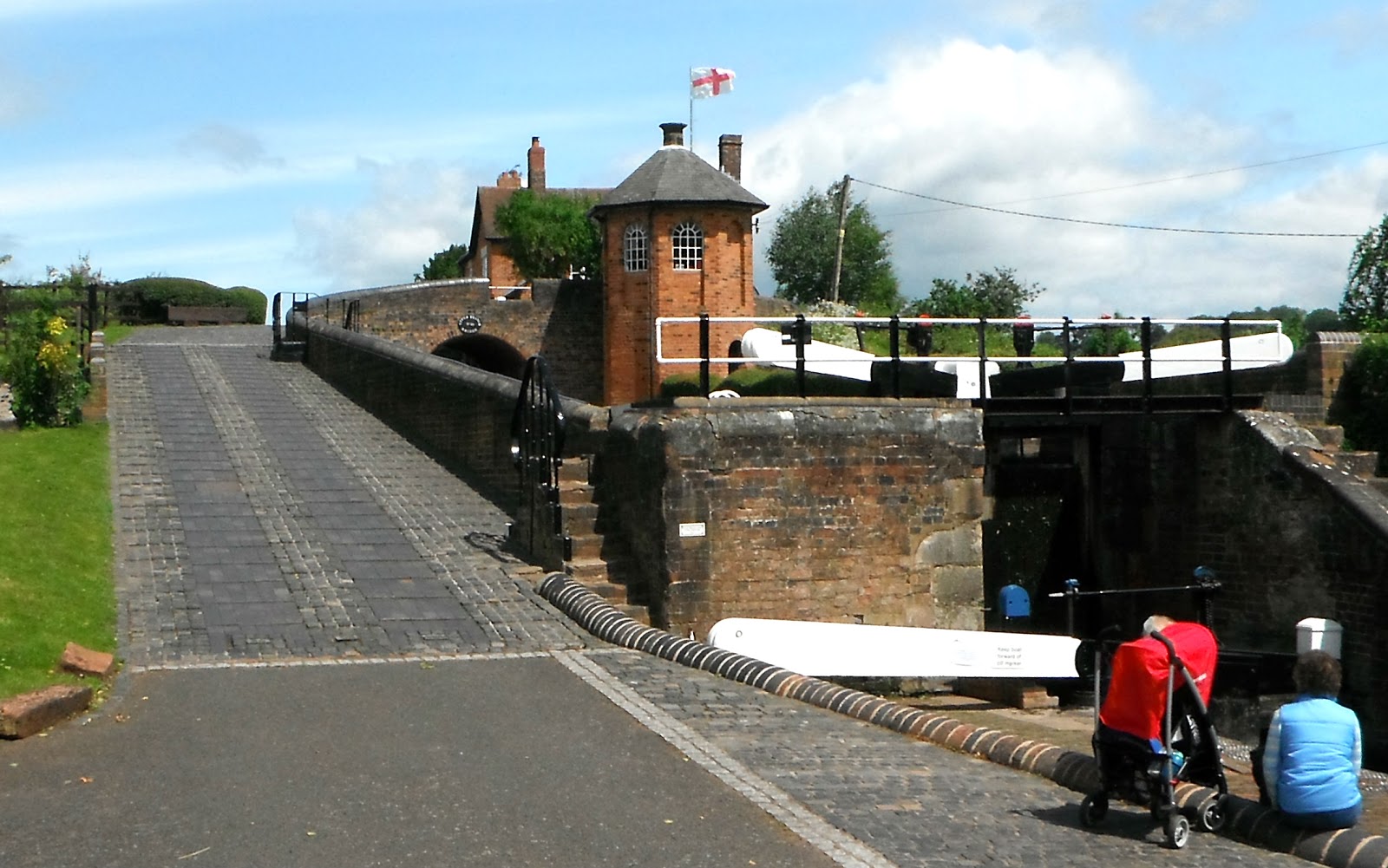 The Bratch Locks are quite a feature in Wombourne.  Not only interesting to canal enthusiasts, they often make for the starting point of various walks.
You can see why.  The toll-house tower, which you see in this photo - is a nicely fantastical talking-point.
Posted by Mark R at Thursday, September 11, 2014 2 comments: 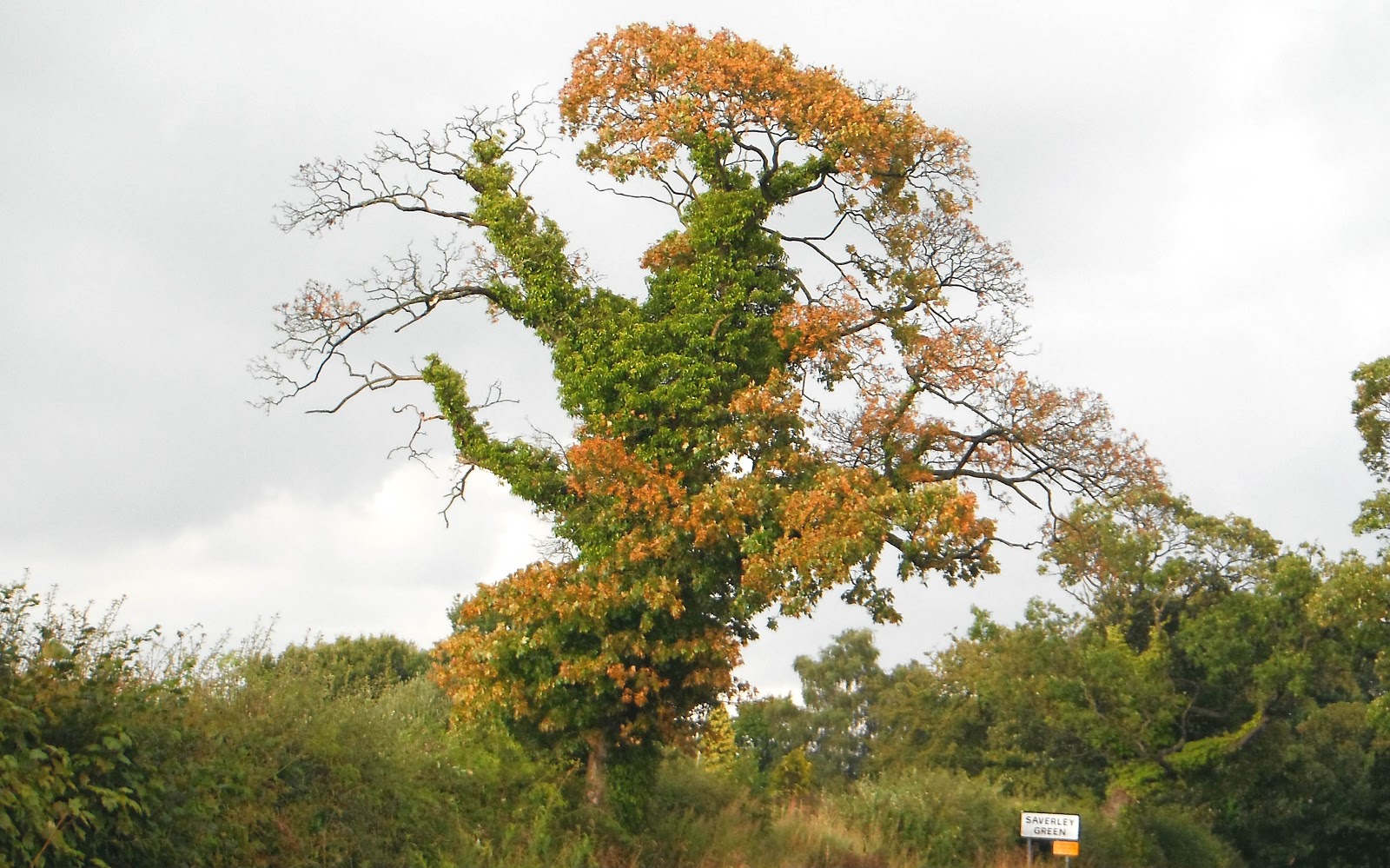 I don't usually go much on 'pictures of oddly-shaped trees' - but this one appealed to me. I'm not sure why.
It could be that its russet colouring reminds us that autumn is almost upon us.
Posted by Mark R at Tuesday, September 09, 2014 1 comment: 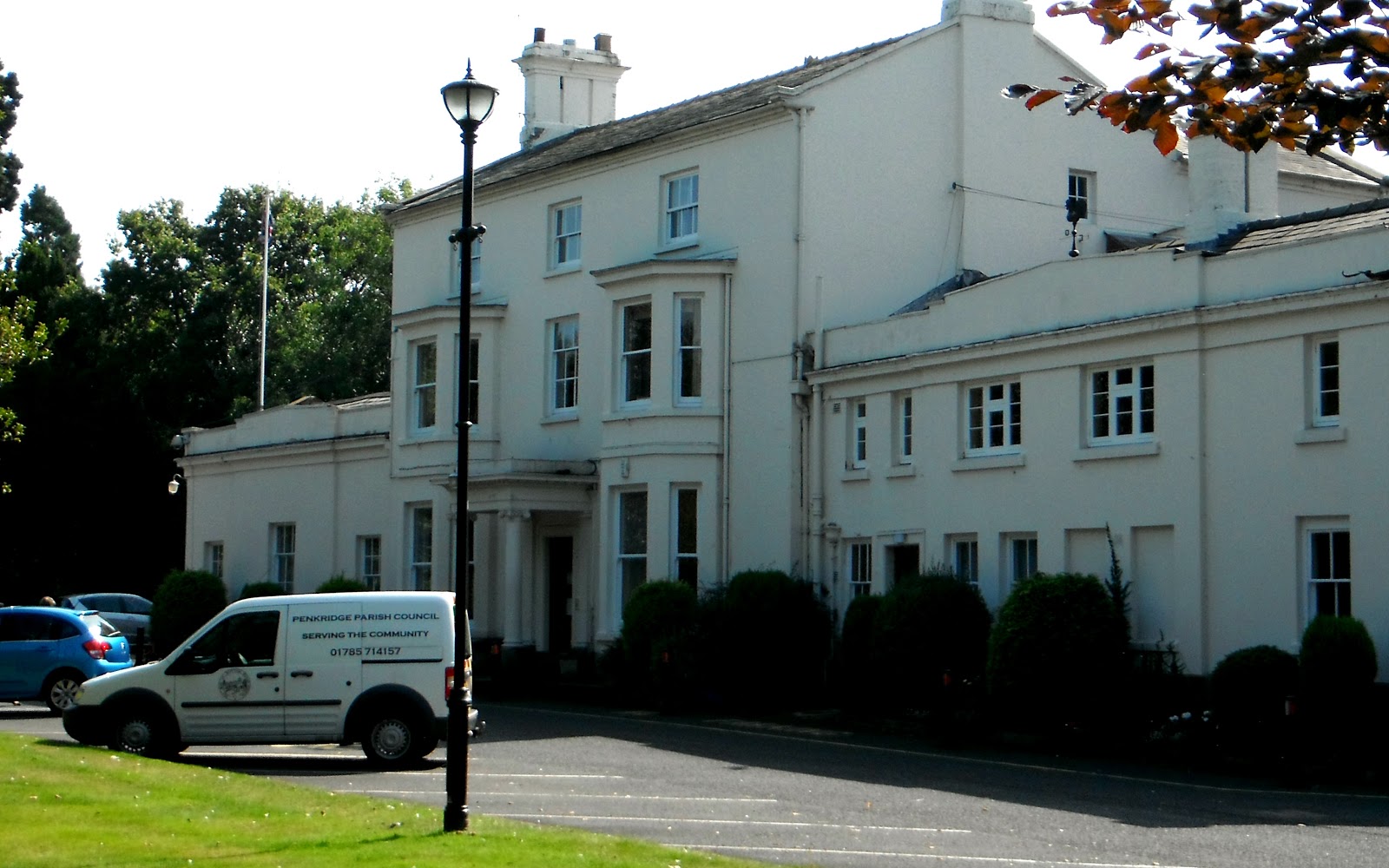 This very grand building, Haling Dene Centre, is the home of a parish council.  This surprised me, as most parish councils that I know can just about afford to rent out a village hall room for their monthly meetings, let alone run a rather portentous centre like this.
What's more the parish council concerned - Penkridge - has bought the place outright (it's not on a lease) and the facilities there are used extensively by locals.  It even runs its own transport fleet!

Admittedly, Penkridge can safely be described as a large village, even a small town, but the whole set-up is still rather an impressive feat for a parish council - a body that is (essentially) the most ignored tier of local government...
Posted by Mark R at Sunday, September 07, 2014 1 comment: 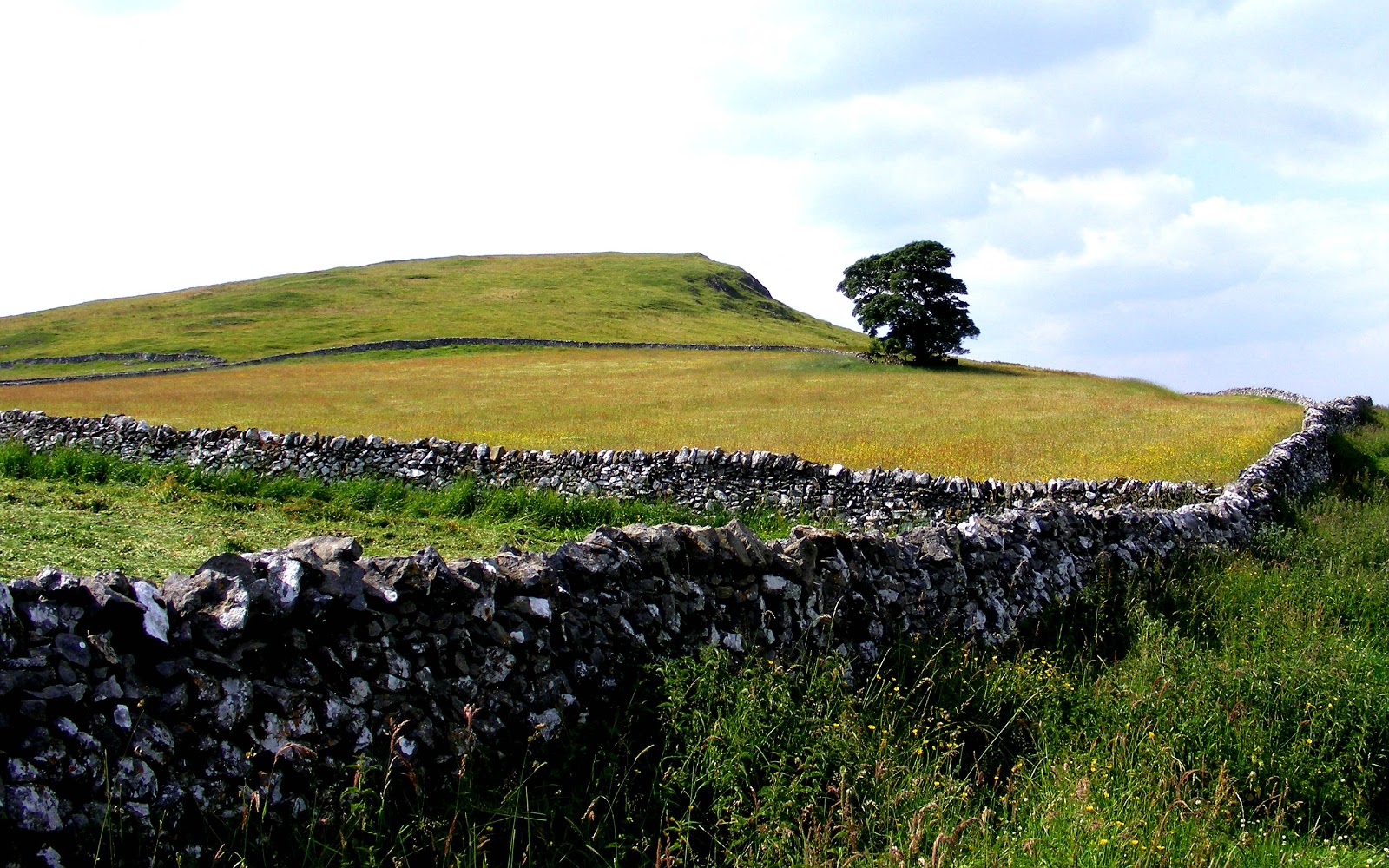 This late burst of summer has brought some glorious days that make you want to be outdoors.  Enjoying a walk on the hills over Alstonefield is a solution...
Posted by Mark R at Friday, September 05, 2014 1 comment:

Play Me I'm Yours 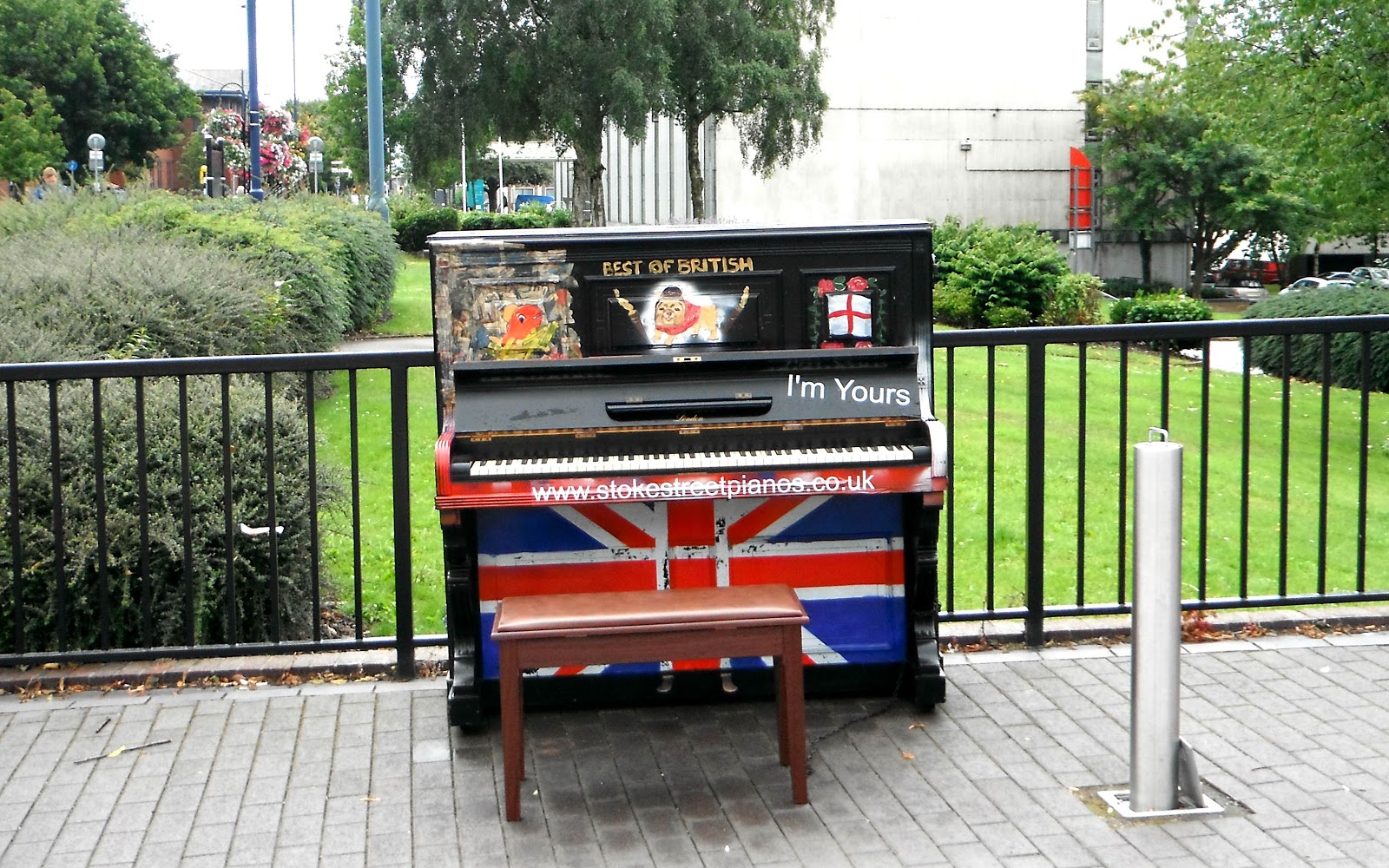 You will never see this piano here again...
This piano is one of over a dozen that were planted in various public sites across Stoke-on-Trent for August, but their time is up, and they have now been distributed to charities.
The whole idea is part of one of those lovely eccentric art projects that pop up every so often to make one smile (yes, yes, I know there is a serious intent behind it, but, honestly!, it's a smile really).

The artist (conceiver?) has planted over a thousand such pianos in cities across the world.

Rich Starkie, who blogs in north Staffordshire, has already been to see nearly all of the (local!) pianos. Well done to him...
Posted by Mark R at Wednesday, September 03, 2014 1 comment: 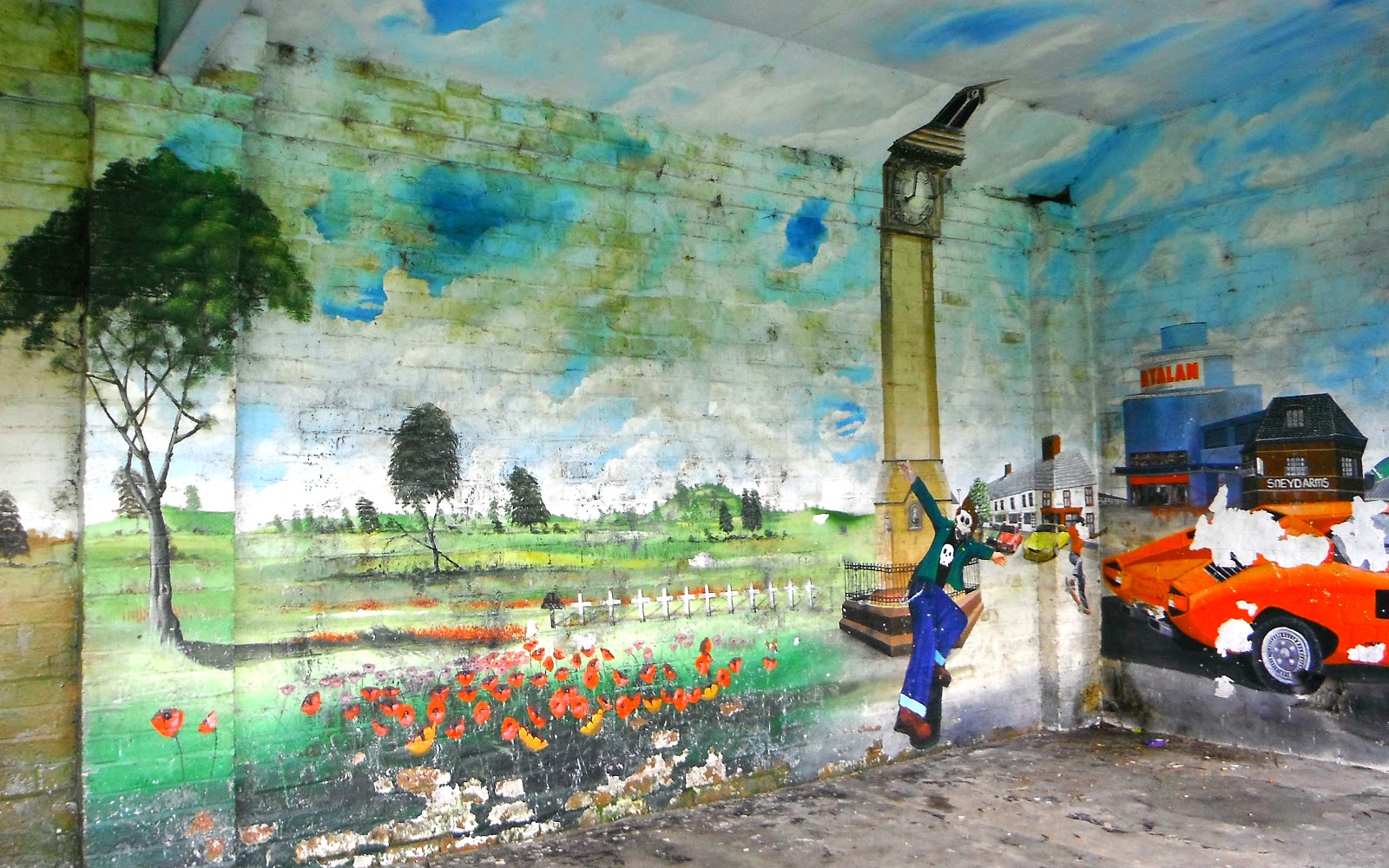 The community mural at the Tunstall Memorial Gardens is a little chipped and faded now, but still has a charm.  I particularly like the blue skateboarder pictured at the base of Tunstall's famous clock tower.

The poppies and wooden crosses remind the viewer that the mural forms part of the town's war memorial space.
Posted by Mark R at Monday, September 01, 2014 1 comment: