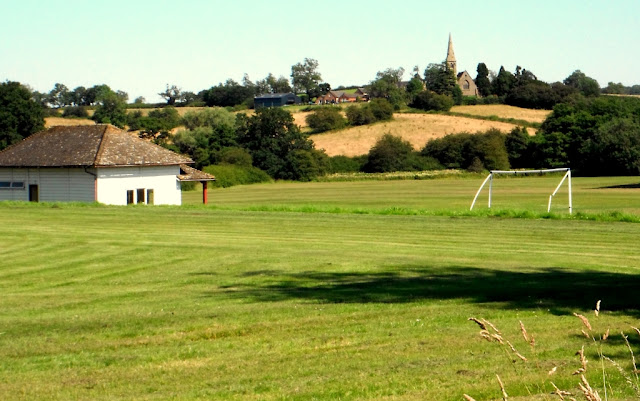 The English landscape can be just perfect some days. I can’t always put my finger on the reason, but sometimes one can just stop (while on a walk) before a view; and find a moment that is, somehow, idyllic.  Staffordshire is, in its own way, the centre of things English of course.

Following the path near the prep-school at Marchington, I had this very feeling.
On another day, another season perhaps, the view might have been dull – but the combined sight of the church on the hill, the golden rapeseed fields and the empty sunlit playing fields all made it quintessentially English.
Posted by Mark R at Wednesday, May 29, 2013 No comments: 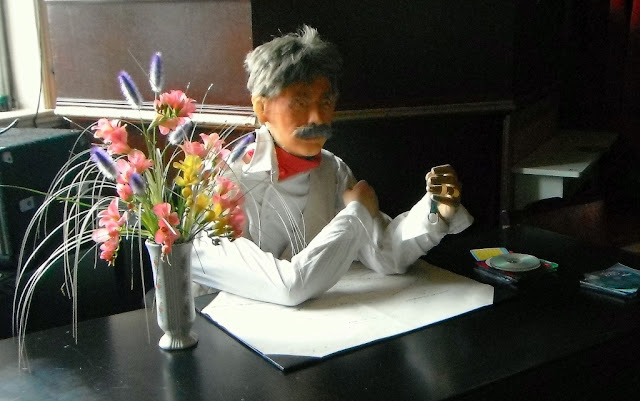 It’s Arnold Bennett’s birthday today – he was born May 27, 1867.  He’s a local hero of course, having not only been born in the Potteries, but having written the definitive novels about life in the Potteries too.  He was a writer of popular classics, but, in his own way, a very wise man too.

Yet, for all that, I cannot think of any major memorial to him in his native north Staffordshire – apart from the one you see in this photo.
A Bennett museum in Cobridge failed some years ago for lack of interest; and a statue of Bennett, which was half-finished a couple of years ago, seems to have, umm, not been finished.

This ‘Arnold Bennett mannequin’ is a popular sight at the historic Leopard Inn in Burslem. The owners seem to move it around a lot, but it’s usually lounging somewhere.
Bennett mentioned The Leopard Inn (renaming it The Tiger) in his Potteries novels.

Links: Arnold Bennett Society
Posted by Mark R at Monday, May 27, 2013 No comments:

Electric cars are the future 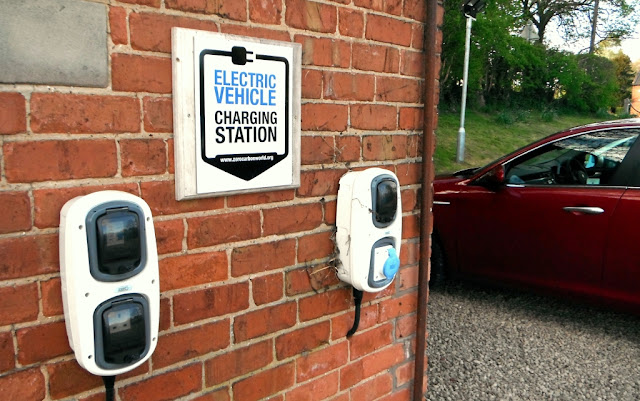 How soon will we have electric cars really visible in numbers on our roads?  I had thought that it would be years yet, but I've just come across this vehicle charging station in Sandon, at the pub there.

However, admittedly, it's one of very few such public charging stations in Staffordshire.

Thors Cave - better out than in 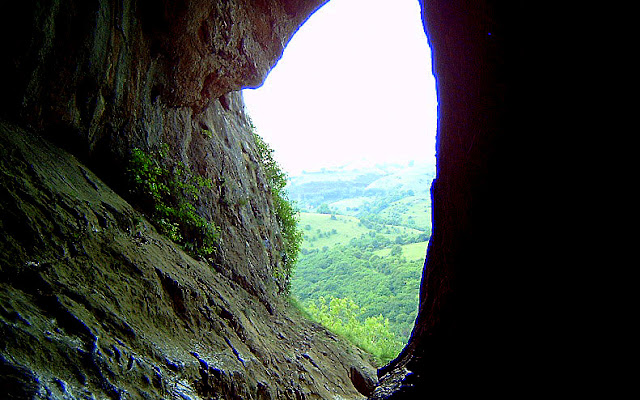 There will be a mad rush into Dovedale this weekend I’m pretty sure. As well as being the bank holiday weekend, it is forecast to be warm. Hooray. At last.

So, if I were you, I wouldn’t go up to Thor’s Cave this weekend; it will be crowded, and it’s a small enough interior anyway.

Actually, it’s just a simple cave in the hillside – nothing to get worked up about anyway.  The climb up to it (on steps, nowadays) somehow makes one hope it’s going to be impressive, but it’s not. The view out from the mouth of the cave is the most interesting thing.

… apart from the fact that the film version of Bram Stoker’s fantasy-horror novel ‘The Lair of the White Worm’ – which actually is set in the Peak District – did use this very cave as a location.
Posted by Mark R at Thursday, May 23, 2013 No comments: 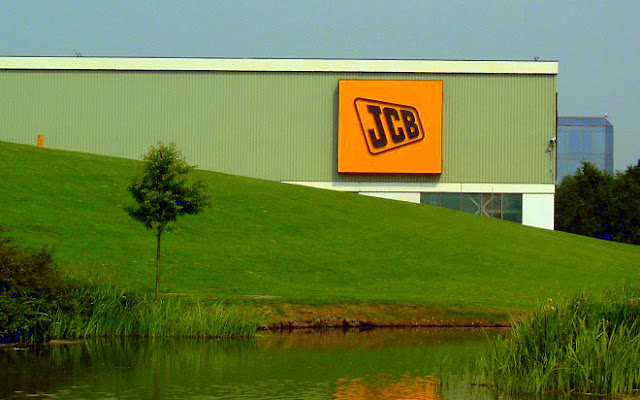 The factories owned by JCB always fill me with admiration.  In Staffordshire we have three – at Rocester, Cheadle and Uttoxeter (all close to each other) but each is beautifully designed to ‘damp’ down their effect on the skyline.

The places in which they are sited (except for the Uttoxeter one perhaps) are deep in countryside, and I think it’s great how the company has been sensitive to the way that buildings can spoil the view – so they have done their best to keep them camouflaged.  Even the garish gold-yellow sign is almost sun-like.

This one is the Cheadle factory.
Posted by Mark R at Tuesday, May 21, 2013 No comments: 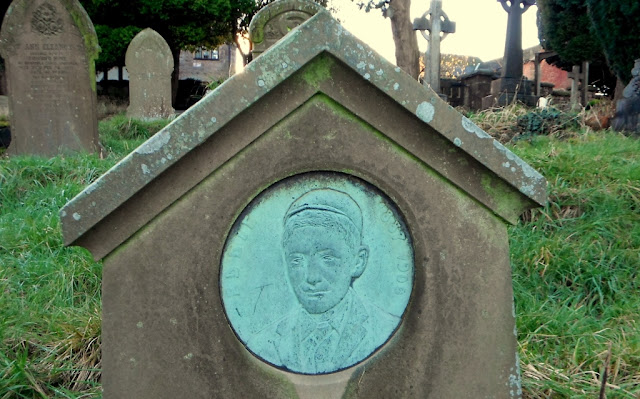 What sad story does this grave tell?
It is unusual to see a portrait on a gravestone in England, yet here is thirteen year old Edward Baddeley portrayed, and dressed in his schoolboy cap.
One can only imagine his grieving parents wanting to see their child fully remembered.

Of the little the grave inscription tells us, the only other telling fact is that young Arthur died at nearby Rudyard in June 1900.

This grave is to be found at St Michael & All Angels Church, Horton.


This post was featured on the Cemetery Sunday website
Posted by Mark R at Sunday, May 19, 2013 2 comments:

The Tunstall Shard is a spectacular piece of large modern sculpture standing slap bang in the shopping area of Tunstall.
It’s made of stainless steel and reflects sunlight fiercely. Local people are really proud of it.  More than one stopped to talk to me and praise it as I stood looking at it.

Somehow, in the taking of this photo, the light from the sculpture sucked up all the luminescence, making the rest of the scene look dark somehow.
Don’t know how that happened.
Posted by Mark R at Friday, May 17, 2013 2 comments:

You are here, wherever you are 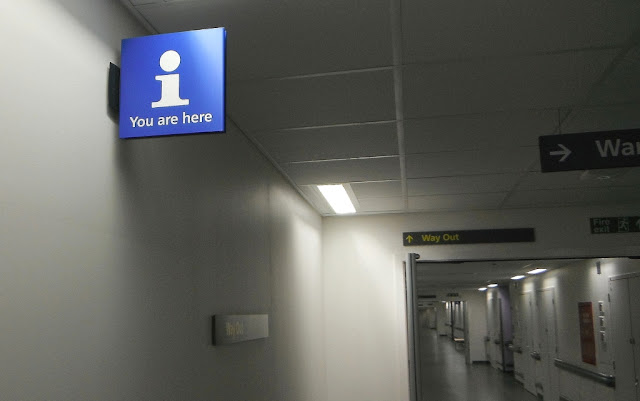 There is something spooky about this sign, which I saw in the main building at the City General Hospital in Newcastle.

I had surreal imaginings about having to endlessly wander blank corridors, only to be told (by sign after sign after sign) that I was forever and ever "here".   Spooky.
Posted by Mark R at Wednesday, May 15, 2013 1 comment: There's a lot of the past in Staffordshire - perhaps too much.  Whether it's the industrial-past or the historic-past, it sometimes sticks around too long.

For example, the notice you see in this photo hangs prominently in Lichfield in the Cathedral Close, which leads up to the cathedral itself (you can see one of its spires in the background).
It says: "The road through the Close, not being a public thoroughfare, no waggons carts & cattle are allowed to pass through.  By order of the Dean & Chapter".

Now, is that a charming relic of a bygone age, or the dead hand of the past forcing itself upon the present?
Posted by Mark R at Monday, May 13, 2013 No comments: 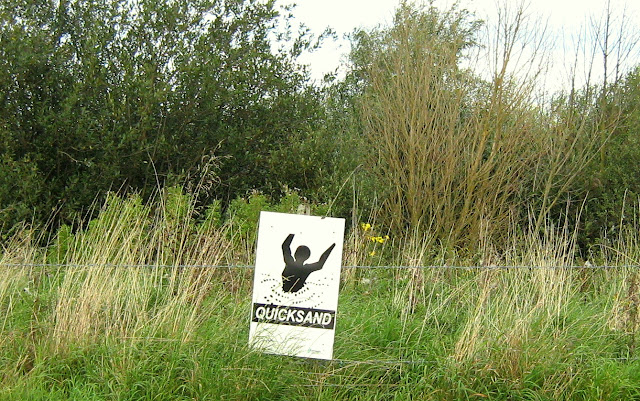 Quicksand is not a common threat to walkers in Staffordshire - though it does crop up.

This rather dramatic poster can be seen at the eastern edge of the National Memorial Arboretum.  The whole NMA site can be treated as a long and interesting walk, though its actual purpose is much more serious of course.
Posted by Mark R at Saturday, May 11, 2013 No comments:

The loving care of bankers 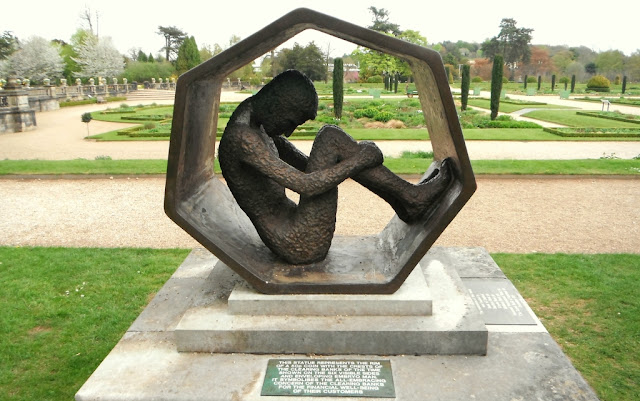 This rather touching sculpture of an ‘embryo man’ has a quite mundane interpretation.
The man is sitting within the shape of a 50p coin; and this 1976 piece is a tribute to the way that Trentham Gardens, here in Staffordshire, welcomed the staffs of the major banks, which re-located here during the Second World War.

Recent events might make people such as you and me rather sceptical about the inscription, which tells us that the work “…symbolises the all-embracing concern of the clearing banks for the financial well-being of their customers”.
Yes, well, I guess many people might be less inclined to believe that now!

Link:  The Fifty Pence Coin sculpture
Posted by Mark R at Thursday, May 09, 2013 No comments:

Sumer is icumen in 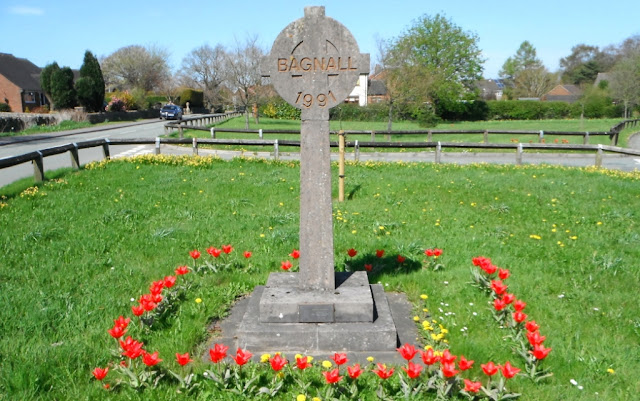 What a bizarre country we live in.  Just a few weeks ago, it was unremitting bleak, snow-ridden weather.
And today?  Brilliant, hot sunshine with Spring flowers hastily bursting into bloom before they lose their season altogether, and blossom seemingly instantaneous.

Bagnall village was just one of the many places where this type of fiercely red tulip was putting on a show.
Posted by Mark R at Tuesday, May 07, 2013 No comments: 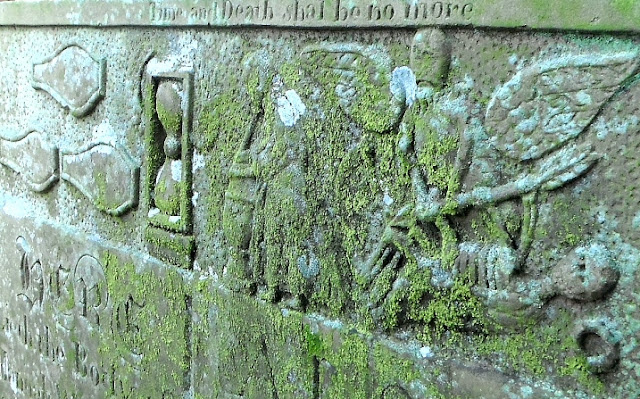 In this tombstone carving you see a winged figure (Time) hovering over a corpse/skeleton, and both appear to be clasping an arrow. It's clearly a struggle of some sort.
Fellow blogger Beneath Thy Feet explained the significance of it to me as Time arrriving to claim his due at the moment of the person's death.  The arrow I guess represents the inevitable trajectory of existence - towards death.
The superscript motto reads: Time and Death shal be no more

So far I've found two of these type of carvings in Staffordshire: one in Audley churchyard, and this one, which is in Horton churchyard.

Taking a photo from the left side of the same carving more clearly shows the woman praying (she who is to become the skeleton I suppose), an hourglass, and, erm... three shapes whose significance I don't know!  If you know what these three shapes represent, I'd be very happy to hear... 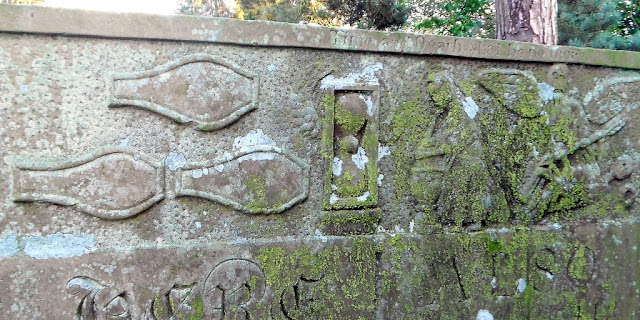 This post was featured on the Cemetery Sunday website
Posted by Mark R at Sunday, May 05, 2013 4 comments: 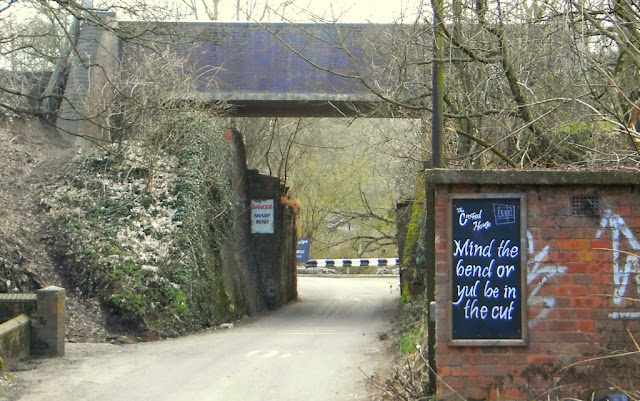 The Crooked House in Himley is one of your more out-of-the-way pubs. It's down a long, abandoned, unlit, narrow lane, and new visitors are never quite sure they're on the right route.

Fortunately, happy lttle signs (such as the one in the photo), advising drivers not to go so fast that they will end up in the river, do remind you that you're on the right road. 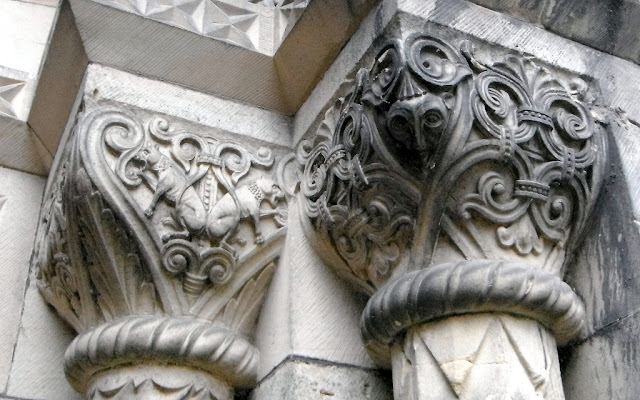 The strange designs and skilful workmanship that can be found at St Chad's church, in Stafford town centre, are really fascinating. The early-medieval carvings, both inside and outside the church, are so intricate that they could only have been done by professional, travelling masons.

The masons' names are forgotten now, but the founder of the church, a man called Orm, has his involvement inscribed in the stones inside.

As I said, the church is slap bang in the town centre, and is usually open on Saturdays.  If you go in then you'll find that the external stone pillars shown in this photo are just the start of some amazing & strange sights.

This post was featured on the City Daily Portal 'Creative Artisans' theme
Posted by Mark R at Wednesday, May 01, 2013 6 comments: