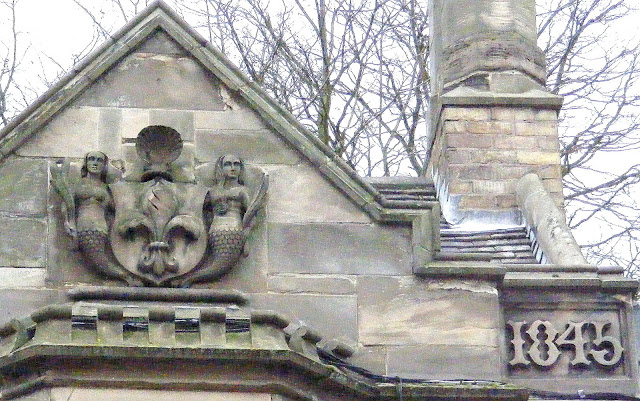 What do mermaids have to do with banking?  That's the question at Bank House in Tamworth where this pair support a fleur-de-lys and shell motifs.
The former bank (built 1845) was founded by Sir Robert Peel, the nineteenth century politician and town's MP - maybe he had to do with the choice of the mermaids.
Posted by Mark R at Thursday, November 29, 2012 1 comment:

The Queen makes a face 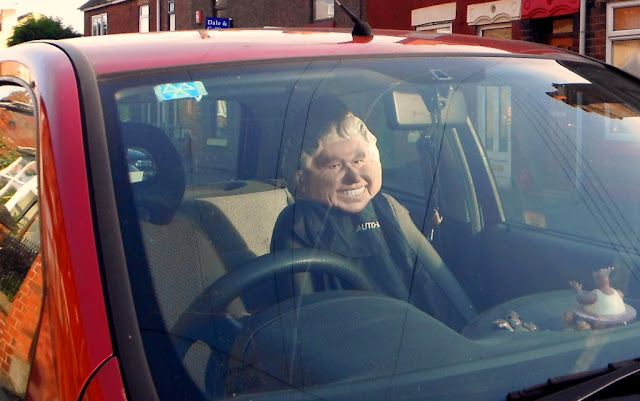 The face grinning at me from within this car gave me a start when I first saw it. I was just walking along, and then suddenly saw The Queen sitting in this parked car.
At least, I think it's The Queen.

It took me a second to realise that someone had perched a mask on the seat's head-rest.
Posted by Mark R at Tuesday, November 27, 2012 No comments: 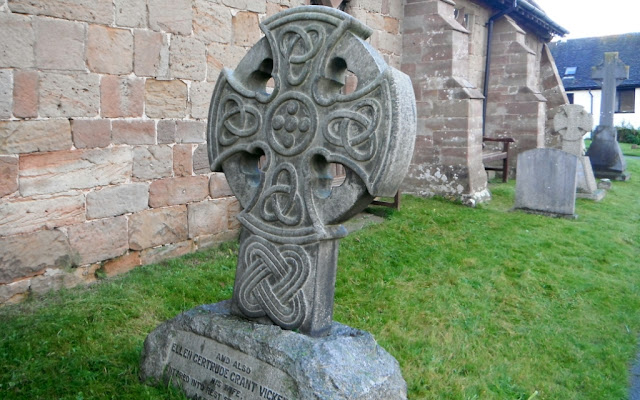 You'd think the ancient Celtic Cross motif would have had an enduring appeal, as a symbol of Irish tradition at least.  But no: it pretty much disappears from graveyards, even in Ireland, between 1500 and 1850.
It was only the Irish nationalist 'Celtic Revival' in the nineteenth century that led to its re-appearance. Those of Irish origin, wherever they were in the world, would choose it to mark their last resting-places.

Whether this grave - in High Offley Church - belongs to someone of the Irish diaspora, I can't tell you. However, she is called Eileen, which is an identifiably Irish name.

PS - yes, this gravestone is leaning!

This post is linked to the new Taphophile Tragics website. Taphophiles are cemetery enthusiasts.
Posted by Mark R at Sunday, November 25, 2012 2 comments:

Peacock on a roof 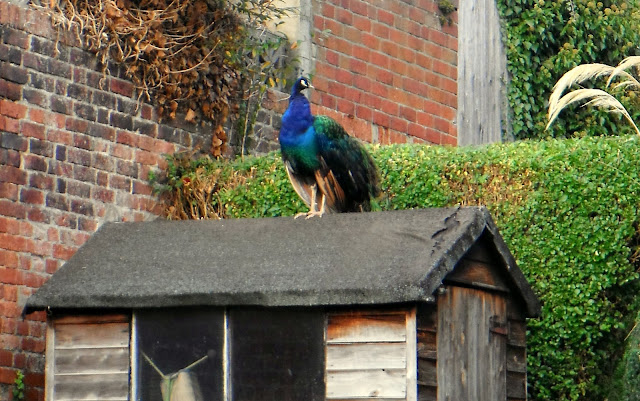 The bright blue plumage of a peacock is a welcome sight in these gloomy end-of-November days. This particular bird is perched on the roof of a garden shed in Tutbury. At the time, he was looking askance at a cat below.

I suppose he lives in this garden... but he may have been passing through. It's possible.
Posted by Mark R at Friday, November 23, 2012 No comments:

Lift a bridge over a canal 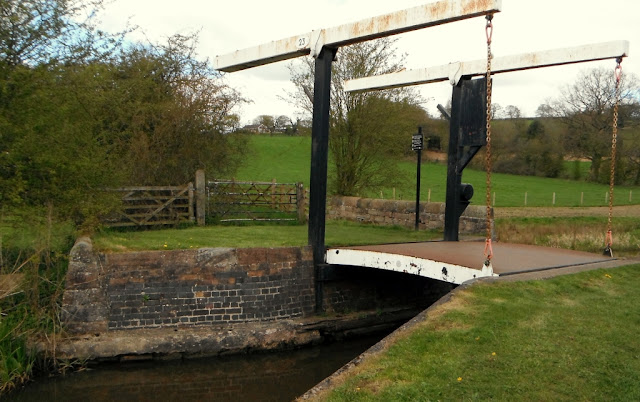 Sometimes called a liftbridge, but what I know as a drawbridge, this structure sits on Caldon Canal near Stockton Brook. It enables people from the farm (on the other side to the path) to move their cattle across the canal - while also letting narrowboats through.

I suppose they must be common enough, as it's a straightforward enough piece of mechanics, but I've not seen many.
Posted by Mark R at Wednesday, November 21, 2012 No comments: 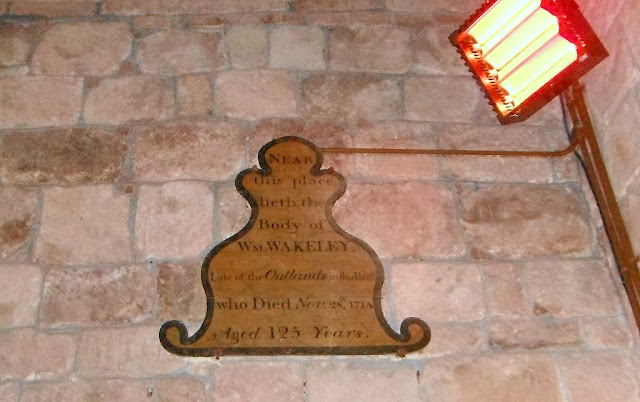 Yes, according to this old wooden board inside Adbaston Church, one parishioner there, William Wakeley, lived to a ripe old age - better than most of us can hope for even in this hygienic age. He died in 1714, aged 125.  So it says...
The effect of this historical object is a little offset by the wall-heater next to it, but I guess it gets cold in these old churches (St Michael & All Angels is twelfth century).

Funnily enough, his actual gravestone, which is by the church door, is not much to look at.
Posted by Mark R at Monday, November 19, 2012 3 comments:

Medieval artists have a joke 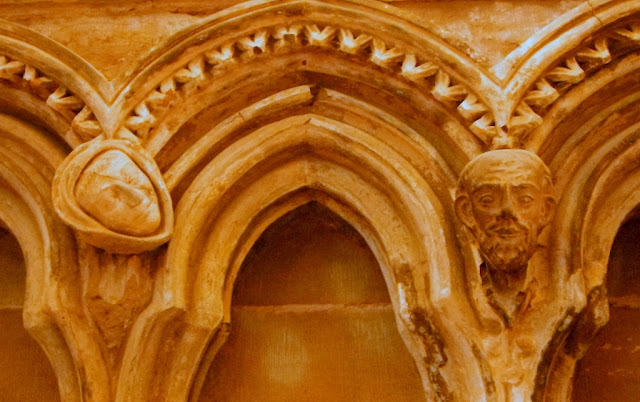 Medieval artists could just as subversive (and as able to insert humour in serious places) as the artists of today.
I say this because, in my previous two posts, I have been writing about a jokey art project which has 'infiltrated' the Potteries Museum - but the long-ago artists who made the carvings in his photo seem to have been of the same mindset!

These carvings - in the chapter house of Lichfield Cathedral - are hundreds of years old, but display exactly the same impish humour.
Quite what the masons who made them were thinking - or what the story behind them is - I just don't know.

But it made me laugh out loud in what is, really, a very serious place!
Posted by Mark R at Saturday, November 17, 2012 No comments: 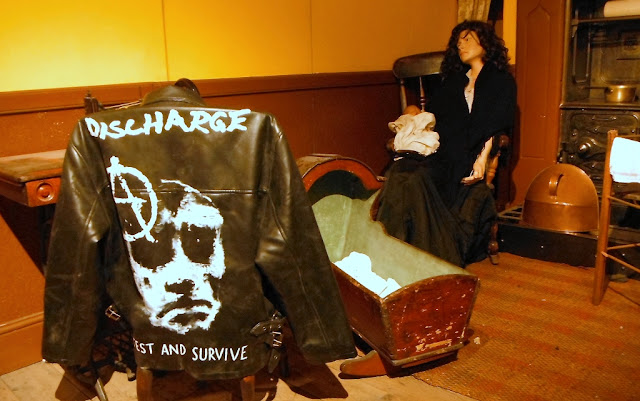 Ah - another "Neo-Dawsonism"!  Yes, this is another barmy, contribution to the current, subversive art project at the City Museum in Hanley.
See my previous post, which explains the background to what's going on here.

This is an exhibit in the Social History section of the museum, which is showing a nineteenth century kitchen - complete with mannequin.
But the artists have artfully added a rocker's leather jacket to this 200 year old scene... thus confusing all visitors to this part of the museum!  Weird.

Incidentally Discharge are a real band - a punk hardcore band, and about as raw as they come, from Stoke-on-Trent.
Posted by Mark R at Thursday, November 15, 2012 No comments: 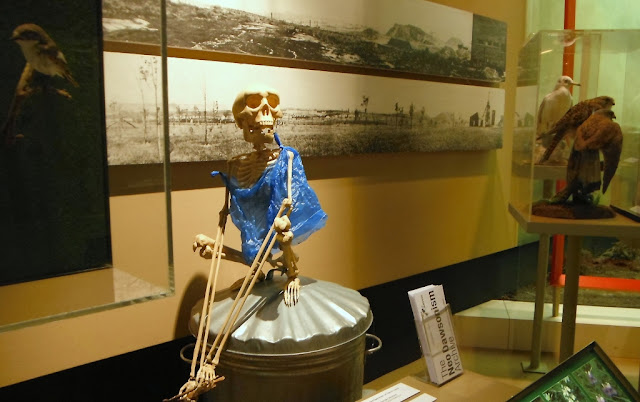 This freakish skeleton is in the Natural History section of the City Museum in Hanley, next to the stuffed birds, and not far from the Mammals. As you can see, it has extraordinarily long arms.
When I passed it, more than a few people were scratching their heads. They were wondering: what sort of animal was this? An urban monkey?

Well, after the double-take, one realises it's a joke. Well, sort-of. It's part of a subversive art project in which a number of odd, barmy objects are placed around the museum at strategic points, apparently as though they really are long-term exhibits.  (There's a plane made of pottery in the engineering section for instance...)

The label by this skeleton describes it as Homo Tesco, and there is a completely nutty description of its history - including a comparison with its close species 'Homo Asda'. It explains the waering of the blue plastic bag as an attempt at a 'shirt'.

The art project, which runs at the museum until December 9th, is called 'Neo Dawsonism' - though a quick search on Google only turned up references to the late great Les Dawson's jokes, also known as Dawsonisms.  Hmm.

I must admit that I thought it very funny - and, somehow, very brave of the museum to allow it! 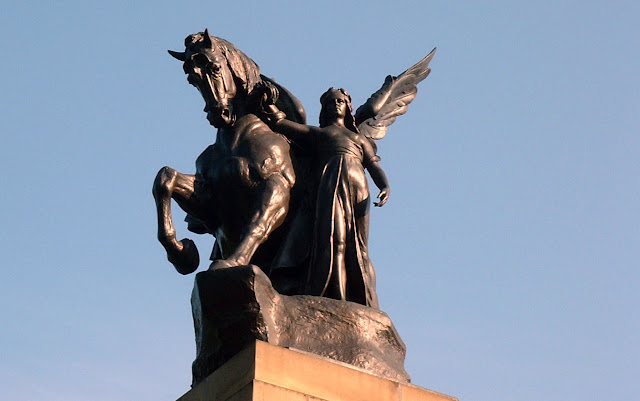 The War Memorial in Stafford is pretty tall, and this sculpture is high up, on a huge plinth. It must be the height of the Trafalgar Square plinths, if not higher.
That's a shame really, as this sculpture group at the top is pretty magnificent - and it would be good if one could see it better.
One might understand the theme a bit better too - as she is supposed to be Peace subduing war-like passions (as symbolised by the horse). Hmm. Doesn't look like that from the ground...

It is Remembrance Day today, so as the premier war memorial in the county, it will be at the centre of a ceremony today.  It is officially titled not the Stafford War Memorial, but the Staffordshire County War Memorial.
The sad story behind it is that the Earl of Dartmouth unveiled the work originally - and his own son was on the roll of the dead commemorated by the memorial. That must have been tough.
Posted by Mark R at Sunday, November 11, 2012 1 comment: 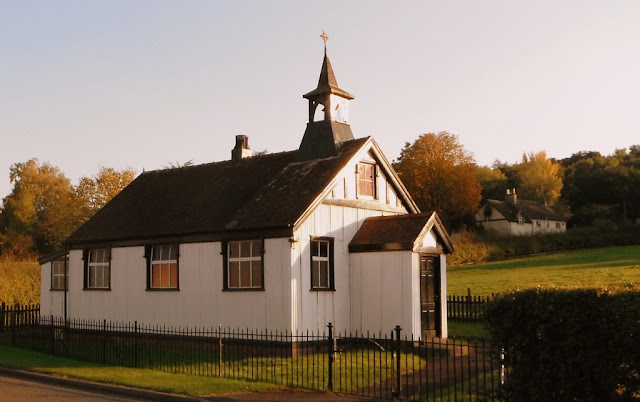 This little church in Draycott-in-the-Clay - Saint Augustine's - is quite an historical curiosity. It goes back over a century to a time when small 'mission' churches were being quickly erected, mostly out of temporary materials, like corrugated iron. Thus, this type of church was eventually affectionately called a 'tin tabernacle'.

But this one, far from being temporary, is still holding services today!
It only holds forty people, and must be cold in winter (surely?) but parishioners would not dream of replacing it now.
Posted by Mark R at Saturday, November 10, 2012 1 comment: 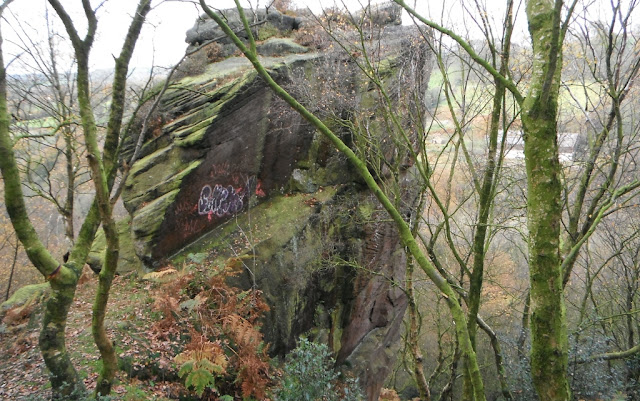 Harston Rock is an outcrop easily reached from Froghall Wharf by public footpath. (The footpath marks the line of the old cable railway to Caldon Low, built in 1847).

Rock climbers use it I believe - even though it is in a heavily wooded area.

One can scramble up the incline of course to reach it - you don't have to climb the rock - and it looks like some graffiti-artists did just that.  I hope the graffiti was not done by climbers...
Posted by Mark R at Thursday, November 08, 2012 No comments: 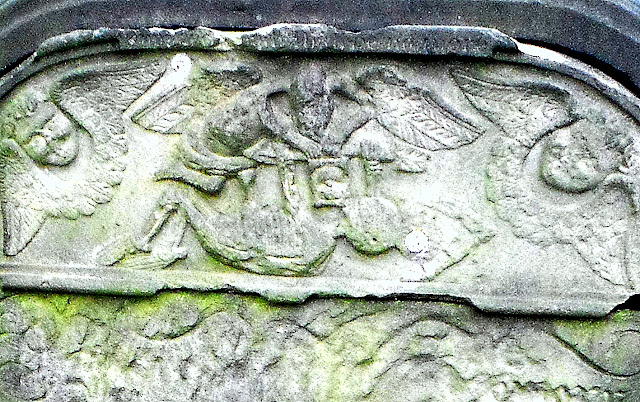 This extraordinary carving at the top of a gravestone could depict a (bearded?) angel reaching down to a skeleton (the one in the grave?). It's very worn - not surprising as the grave is dated 1799 - so it's hard to tell.
The angel appears to be holding something - possibly a sand-timer, or could it be a scales?  To the right of the skeleton's head is a scythe - symbol of both death and time.
Are the two figures fighting? Or is the angel raising the skeleton?

I'd be intrigued to know the story, and will return to the Church of St James at Audley - which opens on Fridays - to find out more from the church-warden.

If you want to take a look, the grave is on the north side of the church, and Thomas & Ann Mellor are buried there.

This post has been featured on Taphophile Tragics (the cemetery-enthusiasts' website)
Posted by Mark R at Tuesday, November 06, 2012 3 comments:

A wallaby in Leek 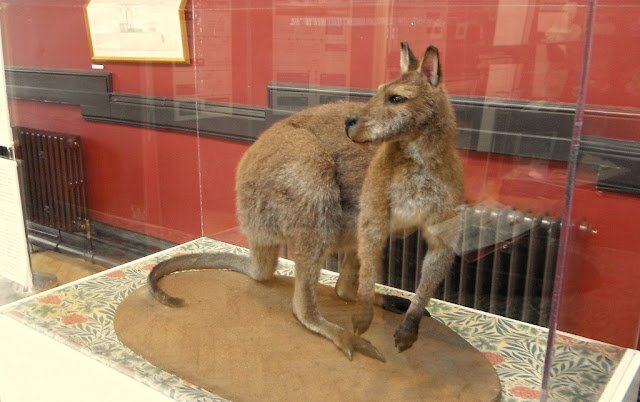 Wallabies are of course Australian citizens...normally... yet this one was definitely north Staffordshire born and bred.
Its body was found in the 1990s on the wild moors north of Leek, being then stuffed, and then mounted here in the Nicholson Institute, the museum of Leek.

The reason he was there was on the moors was, as you'd expect, that his forebears had escaped in the 1930s from a private zoo on the nearby Swythamley estate, and had formed a small wild colony - from which he is presumably descended.
It does seem amazing that these wallabies should have survived the harsh winters up there though.

Sadly, no other wallaby has been spotted for a while now, so (even though they can be notoriously shy) it has to be assumed the colony has died out.
Posted by Mark R at Sunday, November 04, 2012 1 comment: 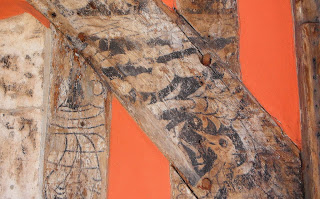 This could be a dragon-worm or wyrm (a strange medieval mythical creature), depicted on this beam at the 15th century Sinai Park House near Burton.  Or could it be just a smiling bird?
These restored timbers remind one that the richer medieval houses could be marvellously and colorfully painted indoors. What we see in historic buildings now is only a faint shadown of what things were really like.

The house is open to the public occasionally, even though two thirds of it is still (sadly) derelict.
Another photo I included on this blog about Sinai Park House was one of its swimming pool, which is not quite as salubrious as it sounds.